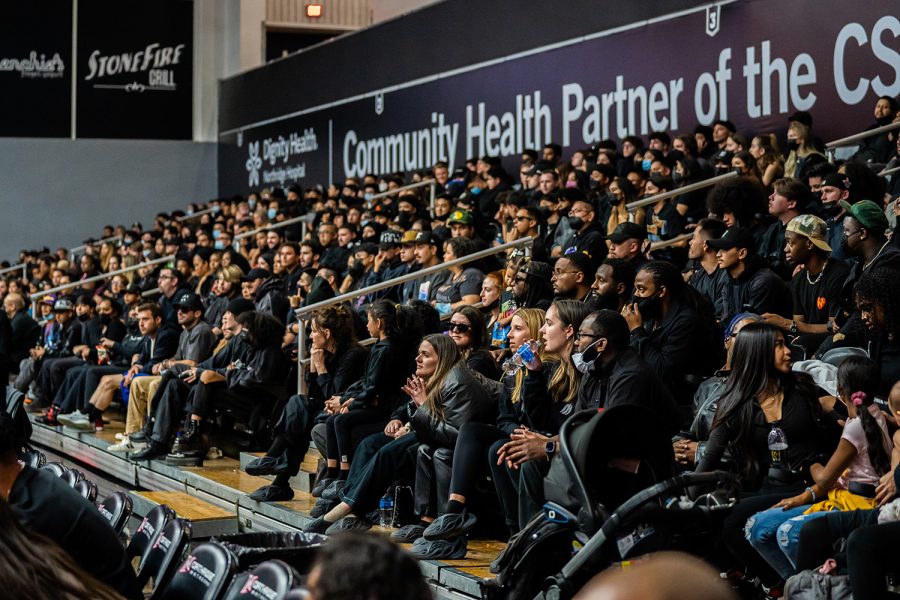 Fans wear all black as a dress code for the Donda Homecoming on March 2, 2022, at The Matadome in Northridge, Calif.

The CSUN Matadome was decked in black on Wednesday, March 2, as Ye’s basketball team played in front of celebrities and students alike.

The Donda Doves, a team from Ye’s Donda Academy, had only played a few games before this event. The Doves took on the Veritas Titans and won 85-61 while spectators watched dressed in all black, a dress code that Ye requested attendants to follow.

The Matadome has not had a sellout event since before the COVID-19 pandemic, when they hosted local high school basketball games for the Sierra Canyon School.

Before the game began, fans were lined up to get Donda merchandise as Ye’s classics like “Jesus Walks” and “Can’t Tell Me Nothing” played in the background.

Many of Ye’s fans, such as CSUN student Natalie Dupler, had no idea what to expect from this event.
“When I saw CSUN was hosting this event, I honestly thought this was a really cool thing to check out,” said Dupler. “I’m a little unsure how this night is going to go because I have never been to an event like this.”

As the game progressed, the announcer told the players and fans, “Let’s make this place like Rucker Park,” a world-famous outdoor basketball court in New York City.

Just like at Rucker Park, the fans reacted with high energy when they saw things they typically do not see on the court. Trae Young, a player on the Atlanta Hawks, is known for being flashy with the basketball — many of these players in the game were doing almost the same moves as him.

Even celebrities showed up to the game, including hip-hop artists Rich the Kid and Swae Lee. Many of the fans, like Dupler, were starstruck to be in the same room with so many celebrities. Fans did not hold back when showing their appreciation for the other artists that were in attendance.

Many fans chanted “Rich” throughout the game in hopes of an acknowledgement from the man himself. Rich the Kid eventually turned over with the brightest smile, waved to the crowd, and received excited roars from a small section of The Matadome.

The Donda Doves were not fazed by the amount of fans and celebrities that showed up to their game at CSUN.

During timeouts, the announcer was giving out free Stem Players to fans who could finish one of Ye’s songs and make a few 3-point shots with a basketball. One of the two participants was able to finish the song in its entirety. Ye specifically made the Stem Players so “Donda 2” could be streamed through them instead of outside companies.

A Stem Player is a speaker that allows you to remix and loop songs and save them on your phone, allowing users to produce their own customized tracks. A Stem Player is worth about $200, and Ye gets to keep all the profits that he makes off the album since it is not available to stream elsewhere. Roughly eight Stem Players were given out to fans.

The contestant who finished the missing lyrics received support from the crowd as many people stood up and started rapping with him.

“I was very pleased with the atmosphere in the stadium,” said Dupler. “It was so cool to have it at CSUN.”