Matador of the Week: Gabe Gonzalez 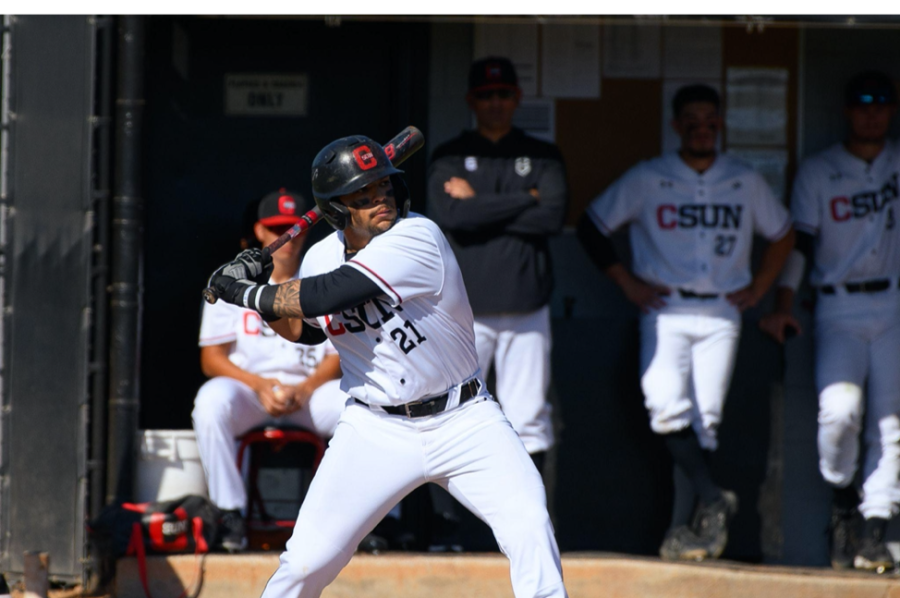 Designated hitter Gabe Gonzalez is Matador of the Week after an incredible hitting performance, going 2-4 with a home run and five RBIs Friday night, leading CSUN baseball past No. 2 Stanford 9-3.

“The five RBI’s were just because of the guys in front of me,” redshirt senior Gonzalez said. “They got on base; they allowed me to pass the baton.”

From Mission Hills, California, Gonzalez attended high school locally at Chatsworth High School. He helped his high school team make it to the CIF Los Angeles City Section championship game in 2016 and 2017. Gonzalez came to CSUN after a two-year stop at Los Angeles Mission College, earning second team all-conference for both years, as well as a preseason All-American.

When asked about personal goals for the season, Gonzalez said he wants to see CSUN baseball compete in Omaha, Nebraska, for the College World Series. He sees where CSUN can go after the win Friday night.

“It showed that we can beat a top-ranked team,” Gonzalez said. He also explained how the team will use this series for the following weeks as they head into conference play.

Gonzalez’s biggest obstacle is being deaf in his right ear. He likes to look people in the eye when communicating, and sometimes he needs to move to the side with his good ear so he can hear people talking to him. He also finds it difficult at times to hear when playing due to the frequent wind at CSUN. Though it might be hard to hear sometimes, Gonzalez loves that baseball has many signs to communicate with players and coaches.

One of his role models that he loves is longtime Boston Red Sox player David Ortiz, since they are both designated hitters. As for his greatest role model, he credits his mother.

“She taught me how to be a man,” Gonzalez said.

Catch Gonzalez and the CSUN baseball team this season at Matador Field for all home games. CSUN opens a three-game series against McNeese State this weekend in Lake Charles, Louisiana.