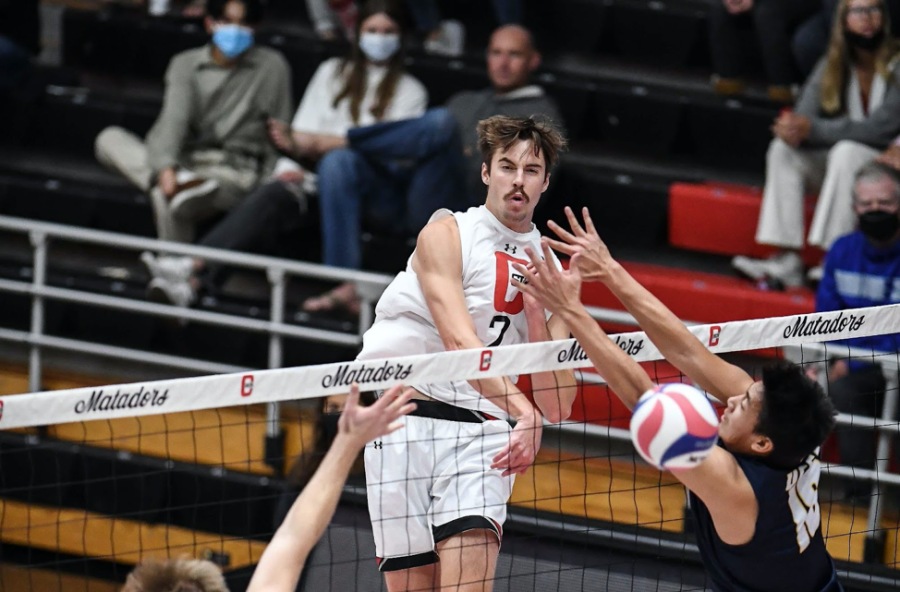 Kyle Hobus (7) delivers a spike against No. 5 UC Santa Barbra, who beat CSUN in three sets on Friday, March 11, 2022, at The Matadome in Northridge, Calif.

When middle blocker Olumide Allen got back-to-back kills in the third set of the match against No. 5 UCSB (14-4, 3-0 Big West Conference) and tied the score at 21, it was anyone’s set as CSUN looked to spark a comeback.

A service error by CSUN gave back the lead to UCSB, but another kill by Allen tied it at 22. The 19 tied scores and five lead changes in set three were not enough for the Matadors to take it, as the Gauchos took the match in straight sets.

This was not the outcome that the Matadors were looking for in their Big West Conference home opener on Friday.

“When you lose a close set like the last set, it’s just a matter of one play,” CSUN coach Jeff Campbell said. “If we made one block, one dig, one serve a little bit better, we were right there.”

Set one of the match was just like set three. Multiple lead changes and tied scores resulted in a back-and-forth battle around the net.

The Matadors took the lead 6-5 in the set after CSUN outside hitter Kyle Hobus received a serve from UCSB’s Xia Haotian. Hobus bumped the serve to teammate setter Donovan Constable, who set Hobus up perfectly for an emphatic spike with the right hand.

A 3-0 run late in the set by the Gauchos, due to back-to-back attacking errors by the Matadors, would give UCSB a 21-17 lead. UCSB ran away with the set, leading by as many as five and closing it out 25-20.

The second set was all UCSB as CSUN never took the lead. Consecutive aces by UCSB outside hitter Dayne Chalmers would put the Gauchos ahead 12-5.

CSUN brought the score back to within five after a kill by middle blocker Daniel Wetter, but UCSB would pile onto their lead and go back up 18-11 in the set after a kill by Haotian.

UCSB led by as many as nine in set two. The deficit was too great for the Matadors as the Gauchos took the set 25-17.

“It came down to making plays at the end of each set,” Hobus said. “Over the past few years we’re accustomed to the losing. This year we have all of the pieces. We’re just a little bit late to finding our lineup.”

The third set was a nail-biter, as no team led by more than two throughout the whole set. UCSB took a 7-5 lead in the set after an attacking error by Hobus, but Hobus would answer back with a kill making the score 7-6.

CSUN would tie the set at 17 after a spike by outside hitter Inaki Bustamante was too much for UCSB libero Ryan Pescok to handle. The three straight kills by Allen down the stretch would not be enough for CSUN, as they dropped the set 25-23.

“We have to figure out a way to play well consistently and we haven’t done that,” Campbell said. “We have to be better.”

CSUN looks to get a win on the road against Pepperdine (9-6) on Wednesday.