Men’s basketball looks ahead to next season 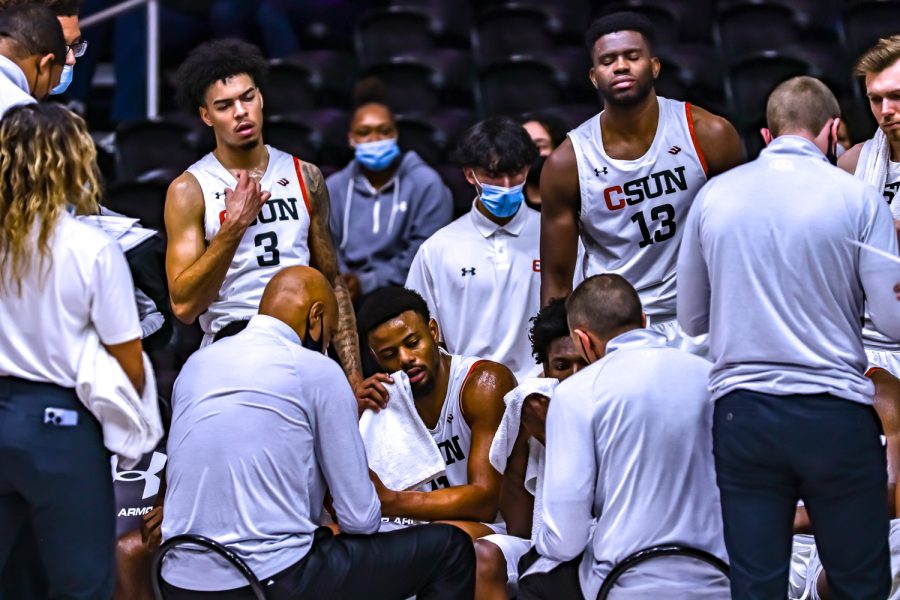 CSUN men's basketball coach Trent Johnson calls for a timeout and works out a game plan against UC Riverside. With a significant gap in the score, the team is exhausted from running defense against UC Riverside on Jan. 22, 2022, in Northridge, Calif.

CSUN men’s basketball team ended their 2021-22 season with an early first round exit, losing 58-45 to CSU Bakersfield in the Big West Tournament on March 8. With the season over, a lot of questions are still pending, but the main question was what would happen to coach Trent Johnson.

Johnson was named the seventh CSUN basketball head coach, but there is no timetable to how long he will be coaching the men’s basketball team.

“We will continue to support Trent’s efforts in continuing to build upon the culture he has worked to establish. Coach Johnson has a long history of coaching success, in addition to supporting student welfare and achievement. He will continue to bring that focus to the student-athletes at CSUN to ensure their continued success on and off the court.” athletic director Michael Izzi said in a statement.
Before being brought on as the next coach, Johnson was the interim.

Johnson’s relationship with Izzi was one of many reasons to coach the Matadors, he said in a press conference before the 2021-22 season started. Johnson had an overall record of 276-264, with winning tenures at three of his previous coaching stops at Stanford, LSU and TCU.

Before the start of the 2022 season, former CSUN men’s basketball coach Mark Gottfried and his entire staff were put on paid administrative leave in April 2021 because of an internal investigation into alleged rules violations, according to a university statement.

“CSUN does not comment on specific employee issues and cannot elaborate further about the nature of the potential violations while the review is underway,” according to the statement.

On Dec. 23, 2021, CSUN officially announced that they had parted ways with Gottfried for an undisclosed reason in a press release.

Before coaching the Matadors, Gottfried spent six seasons with North Carolina State, where he coached from 2014-17 having a 123-86 record. He guided the Wolfpack to the Sweet 16 in 2015, but that was the last time Gottfried had a winning season.

While Gottfried was let go from NC State in 2017, in 2019 his name was connected to federal allegations of bribery and corruption into college basketball while he was at NC State.

For his connection, the NCAA gave Gottfried a one-year show-cause, the worst penalty a coach can get, for not monitoring Early’s actions. Early received a six-year show-cause for his role.

While NC State had questions about the situation, Gottfried sued NC State in federal court in September 2020 accusing the school of not paying him his settlement payments after he was fired in 2017. An agreement of $400,000 was reached later on.

“As I knew it would, this decision reiterates that I had no knowledge of or involvement in any payment. Although I am disappointed in the panel’s finding that I failed to sufficiently monitor, I appreciate the panel recognizing that the facts warrant a mitigated penalty,” Gottfried said in a statement.

Although he had allegations, Gottfried got a fresh start at CSUN, but had a 37-51 record in three seasons. However, his coaching duties were cut short in 2021.

The 2019-20 season was the last season Gottfried coached the Matadors. He had his best coaching season, finishing second in the conference, but the season was cut short due to the COVID-19 pandemic, forcing the Big West Tournament to be canceled.

Gottfried and the athletic department mutually agreed to part ways, CSUN had to find a coach fast since it was already late into the offseason. Experienced coach Johnson was hired in the 2021-22 season.

“Recruiting is something that will always be important,” Johnson said because when he was first hired as interim he only had a couple weeks to recruit.

Johnson utilized the transfer portal when he first got on board and some of the players he was able to grab included Elijah Hardy, Darius Beane, Christian Gray, Onyi Eyisi and Miles James.

While most of the transfers got playing time, many of the players who weren’t accustomed to starting roles were plugged in. One role in particular that usually didn’t need filling is the point guard spot, occupied by Darius Brown II, who was ruled out for the entire season back in December 2021.

Brown didn’t miss a start since arriving at CSUN in 2018 but was sidelined most of this season for a lingering knee injury, but he wasn’t the only one dealing with issues. Most of the team was dealing with undisclosed injuries and COVID-19 related situations.

Sophomore guard Atin Wright was asked very early to fill Brown’s role. During Wright’s freshman year he came off the bench, averaging 4 points per game. This season he finished by averaging 14 ppg while playing more than 35 minutes per game, which is a leap from playing only a few minutes from time to time.

With Johnson’s coaching history, many believed that he would be able to lead the Matadors to a repeat of the 2019-20 season. Despite finishing the 2021-22 season in eighth place with an overall record of 7-22, and 3-13 in conference play.

The Matadors had a stretch where they lost seven straight, but during the losing streak Johnson was vocal that most of his players hadn’t played all season during the streak.

With CSUN eliminated, this leaves a lot of questions as to what is next for the Matadors. CSUN will say goodbye to Brown and guard Brendan Harrick. Both will be graduating in the spring, but will enter the transfer portal as they each have two years of eligibility left.

“Darius has been here for four years, he has given everything to this school,” said Johnson. “He has a right to the [transfer] portal, its new in this day and age, but that’s what kids do,” said Johnson.

Gray exhausted his eligibility, which means his playing days are over, and injuries to Miles Brookins have caused him to medically retire.

Players come and go, but Johnson has already begun to recruit for CSUN since he has more than enough time compared to when he first took on the interim position.