Students report pattern of harassment from solicitors on campus 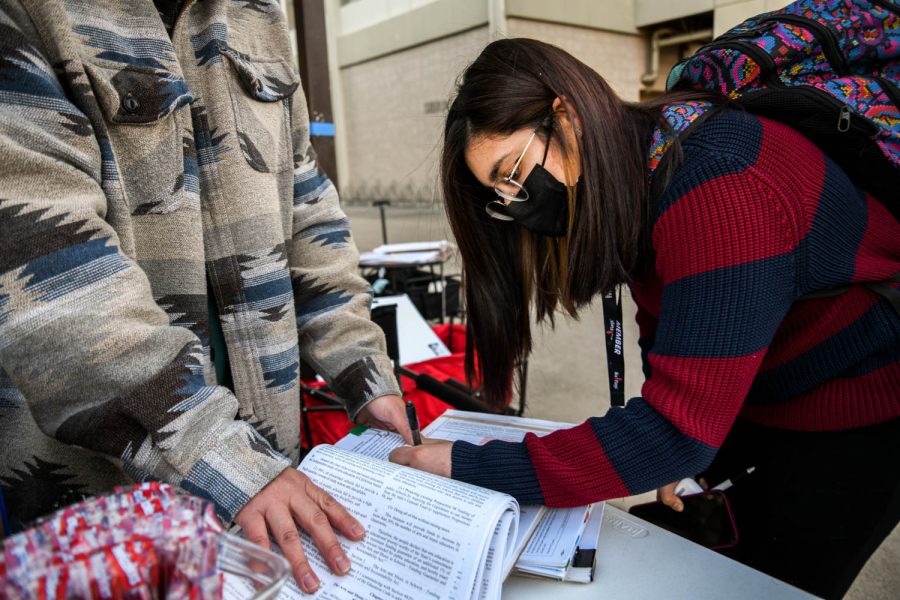 CSUN students have reported solicitors attempting to gain signatures for petitions in multiple ways which have made them uncomfortable.

These solicitor groups have set themselves up in various locations on campus in previous years. Recently, they have been spotted outside the parking structures and in front of the bookstore and campus library.

Because CSUN is a public institution, the grounds are open to solicitation, according to Vicki Allen, interim director of the Matador Involvement Center. They do not have to disclose their employer due to there being no monetary transactions while they are on campus.

Students have had varying experiences with these solicitors, with some saying that they can be very pushy and aggressive.

Jasmin Correa, an animation major, said that she tries as hard as she can to avoid the solicitors.

“I was approached by a few people and just said ‘no’ when they asked if I was registered to vote and one guy was visibly annoyed at me,” Correa said. “I hate how they will keep walking with you instead of staying where they are because they want a response and it feels like a breach in personal space, especially with COVID.”

“A lot of the men doing it make me very uncomfortable,” Cline said. “They use pet names like ‘honey,’ ‘beautiful,’ ‘sweetheart’ to try and get my attention, which I find very creepy.”

Jason Argueta, a political science major, explained that the actual content of the petitions can be entirely different from what the solicitors claim.

“They’re pretty pushy when they approach me,” Argueta said. “The guy basically jumped in front of me to get my attention. They kept advertising that these petitions were for helping the homeless, but once I started reading the petitions it was actually for initiatives like letting people place sports bets or keeping rent low.”

Max McDermott, a liberal studies major, did not feel personally threatened by the solicitors.

“I walked over and she actually explained everything I signed for, which I appreciated,” McDermott said. “We had a civil, intellectual conversation and I didn’t feel rushed. I felt like I was doing something good for democracy.”

Individuals and groups soliciting on campus are often hired by a third party.

Felipe Magalhaes is a solicitor who was set up outside the campus library for FieldWorks, a company that hires petitioners to get signatures for progressive initiatives. Magalhaes gathers signatures for petitions to solve what he claims are issues that affect the community. He says that he does this to exercise his democratic rights.

Magalhaes is employed by multiple companies but works mainly under FieldWorks.

He claimed that the negative experiences students have had with solicitors are coming from a separate group, mostly gathered online via Craigslist or LinkedIn. He said that these solicitors will often have a large amount of petitions and be aggressive. He strongly distinguished between himself and those groups as they do it for the money. While Magalhaes is also paid for his work, he expressed his passion for the petitions he solicits signatures for.

Allen said that at CSUN, solicitors are not allowed to go inside campus buildings. They are also not permitted to attach flyers, posters or business cards on light poles, car windshields or buildings, as this would result in the groups creating litter on campus. Solicitors can be removed if they violate the law or campus policy.

No solicitors have been removed from campus since the start of the semester, according to Allen. CSUN soliciting policies are currently under review to ensure they are up to date since the majority of students have returned to campus.

Regarding student discomfort caused by solicitors, Allen explained that she believes it is up to students to ignore or bypass these solicitors. She suggests that if a solicitor does not know what their petition is about, or will not explain it, it is best to not sign the petition.

“Set your own standards to what you would be willing to engage,” Allen said.