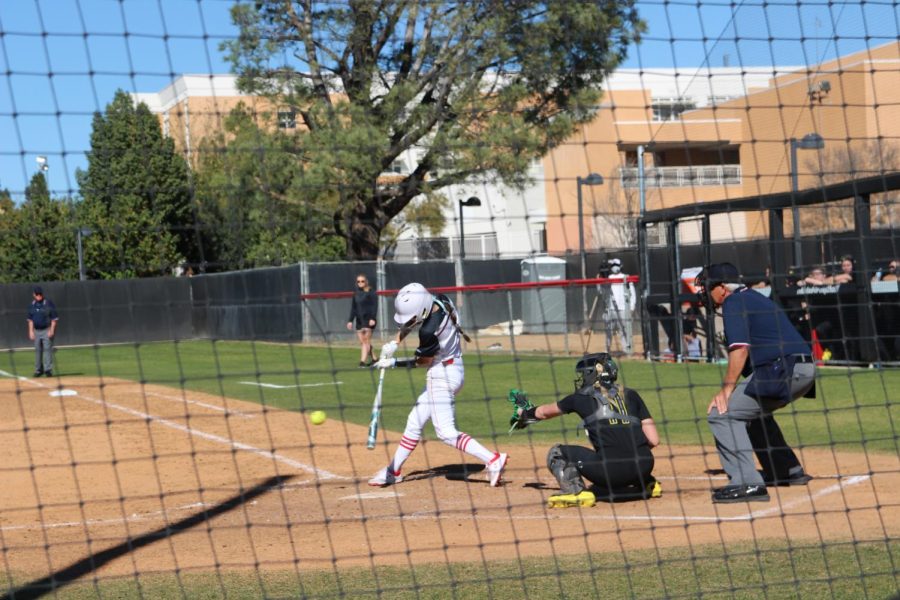 CSUN softball (10-17) wrapped up a doubleheader March 16 when they hosted South Dakota State at Matador Diamond.

The Matadors struggled both games against the Jackrabbits as they had a hard time being able to discover a rhythm during the doubleheader, losing game one 5-1 and game two 6-0.

Putting up a cumulative score of only one run, the team was only able to muster five hits throughout the two games, with three of them coming from left fielder Mikayla Carman.

“Our big thing is playing as a team. We’re getting a little bit individual recently,” Carman said. “We have a lot of heart on this team and if we come together and play as a team like I know we can, then we’re going to do really good in [the] conference.”

CSUN could not get their heads into the game, as it felt like a home game for South Dakota State considering fan turnout and heavy cheers after big plays.

South Dakota State center fielder Jocelyn Carrillo made an electrifying catch when she made a leaping dive to end the first inning in what surely would’ve been a triple for the Matadors to get momentum back on their side.

Whenever the Matadors attempted to make a game-changing play, the Jackrabbits had a swift response for every move they made.

“Overall, it’s finding a way to get a rhythm even if you don’t really have a rhythm,” CSUN coach Charlotte Morgan said. “Find a way to make adjustments within your at-bat, within the game, and make them make errors, put the ball in play where we can at least get some momentum going.”

South Dakota State pitcher Grace Glanzer was the contributing factor to the Matadors’ problems on offense as she only allowed one hit over the seven innings that she pitched.

That was the story of game two, as the Matadors were only able to get one hit compared to the Jackrabbits’ 13 hits and six runs.

“I think I’ll make some adjustments and see what they need and then hopefully we can get to the drawing board and work on this tomorrow,” Morgan said.