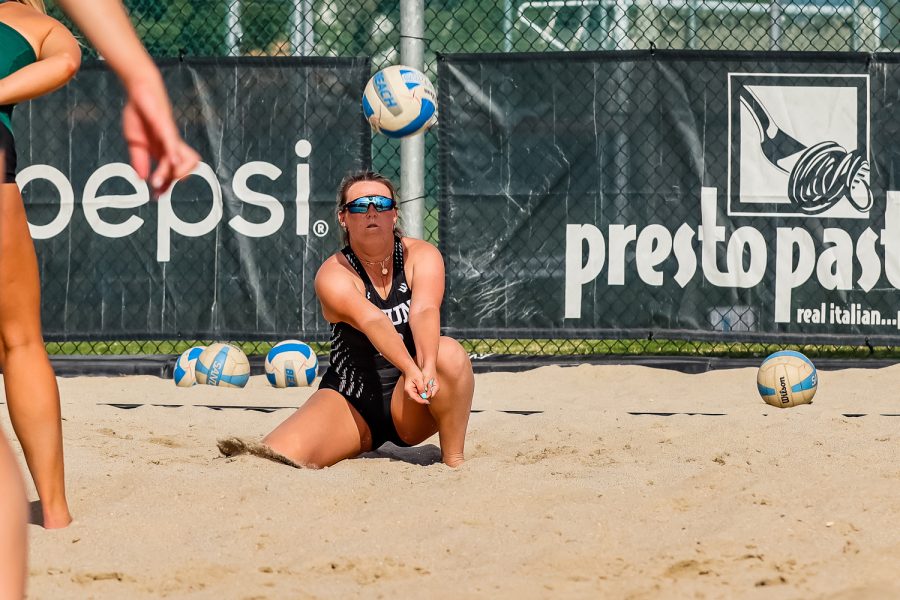 Kailey Klein digs the ball during a game against Concordia University Irvine in Northridge, Calif., on March 17, 2022.

CSUN beach volleyball (5-7) split a doubleheader against the University of Nebraska (5-10) and Concordia University Irvine (12-2) at the CSUN Beach Volleyball Complex on March 17.

In the first match of the day, the Matadors would go on to win three sets to two over the Huskers.

CSUN clinched the win as Lauren Eknoian and Rogers defeated Madi Kubik and Kenzi Knuckles by the score of 22-20, 21-10.

The Matadors were tied with CUI at two sets apiece before losing the final set.

It was as if the world had stopped momentarily when Matadors True McCullough and Darbi Honeycutt went toe-to-toe against the Eagles’ Ellie Cary and Isabella Bush.

“They’re a good team. It could have gone either way,” McCullough said. “We just have to focus on what we can do better next time because we’ll play them again.”

Eknoian and Emily Sparks, who was struck with an illness a week prior, swept the Eagles’ Vanessa Bernzen and Hannah Phair 2-0 with a score of 21-19, 25-23.

Bernzen and Phair put up a fight against CSUN in both sets, but couldn’t handle Sparks’ defense and counter-attack.

“Me and my partner [Eknoian] just wanted to make sure we started strong and kept our momentum going,” Sparks said. “As a team we all just worked together as a pair to get the first win. The second match we had moments of greatness — it was definitely a tough loss. Tomorrow we’ll come out much stronger.”

CSUN coach John Price gave his team high praise for their ability to overcome adversity, regardless of the loss.

“I obviously would have rather won than lost, but I felt like we had our chances,” Price said. “We just didn’t convert our opportunities, but overall I was pleased with the day.”