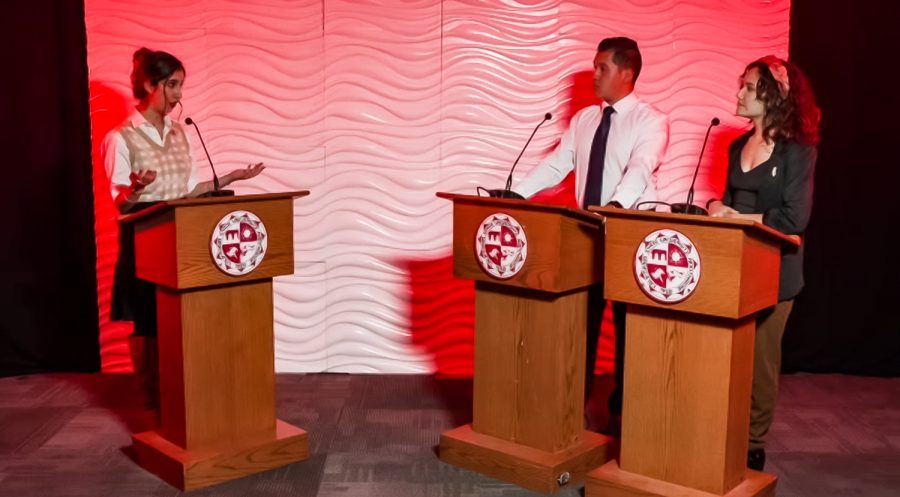 (From left) Vice presidential candidate Eden Shashoua and moderators Michael Tejax, chair of elections, and Senator Kiana Requena at the virtual AS Presidential and Vice President Debate on Wednesday, March 30, 2022.

The hour-long Zoom event was hosted by moderators Michael Tejax, the chair of elections, and Senator Kiana Requena. They spent the hour asking questions to presidential candidate Shayan Moshtael, the current attorney general, and vice presidential candidate Eden Shashoua, a junior business major, one at a time.

The first half of the event was spent with Moshtael, who was given a chance to present an opening statement. He said that the many wonderful experiences he has had at CSUN are a major motivator for him.

“Like many of the students here, CSUN was originally not my first choice, but I could not possibly be happier to actually be a student here,” Moshtael said. “If you told Shayan Moshtael four years ago how happy he would be to be here — and how this was ultimately the right choice, and all the things that he’s accomplished with his time here — he would maybe not believe it, but he would certainly be ecstatic.”

When asked what motivated him to run for the position, Moshtael admitted he had not taken the opportunity seriously at first. But that changed for him when he thought of his friend, current AS President Jonathan Hay, and Marvel Comics’ Spider-Man.

“Jonathan Hay, he’s become a bit of a mentor to me … a brother figure,” Moshtael said. “I’ve learned so much from him about responsibility. Another one of my heroes is Spider-Man. ‘With great power comes great responsibility.’ I think that’s something that Associated Students has provided me and that’s a power that comes with a responsibility.”

Moshtael addressed a lack of campus involvement among the student body to be a major issue he wants to fix as president. He brought up the “dwindling membership counts” among clubs and organizations as something he wants to improve.

“Student involvement actually causes a lot of problems across the board when it’s lacking,” Moshtael said. “The university experience does not end at the classroom. We want to be able to bring that excitement back and make it the Matador experience … being able to showcase the ways that students can get involved.”

Throughout the event, the audience was allowed to submit questions they wanted the candidates to answer. One question that was asked of Moshtael was, “What would you do to promote more representation and participation of the deaf community on campus?”

Moshtael acknowledged that this was an aspect he could improve on as a candidate. He said that he hopes to become more educated and to make an effort to reach out to CSUN’s deaf community to inquire about any issues he should address as president.

In response to a question about what motivated her to run for vice president, Shashoua recounted the experiences she’s had at CSUN and how she wants to give back to a community that has treated her so well.

“I’ve been given the opportunity to join different clubs and organizations and meet new people and network with different professors who have become my mentors,” Shashoua said. “I’ve learned so many skills when it comes to leadership, communication and team building.”

When asked how she could help improve safety and security on campus, Shashoua stressed the importance of police services being present.

“Obviously a police service has been proven to reduce different crime rates and make people feel safe, I think having that presence is important,” Shashoua said. “I do know that there have been some concerns about the police force making students feel unsafe, but I think there’s always room to reform and create different policies that can balance students feeling safe and the actual safety of having police on campus.”

Because she has no prior experience in AS, Shashoua addressed the possible challenges she may face. However, she promised to continue to educate herself on AS’ practices and to make sure she is able to fulfill her role to the best of her ability.

Like Moshtael, a challenge Shashoua wants to immediately address is student involvement with the campus. She explained the struggles she noticed students were facing as a result of online learning.

“Being a student online, it can be hard to build the courage to send an email through Canvas or to contact other students for help with an assignment or to ask a question,” Shashoua said. “The first thing I want to focus on is to rebuild that sense of community and make students comfortable again with having that social interaction and meeting with each other, professors and AS as well.”

Shashoua also said that a return to campus can be a great time to rebuild that relationship. Because some students may still be nervous about being on campus, she suggested hosting more outreach opportunities for clubs and organizations, such as having tabling events in areas other than where they are usually held.

Voting starts on Monday, April 11, at 8 a.m. and polls close on Wednesday, April 13, at 6 p.m. Ballots will be sent to students’ CSUN emails for virtual voting.