Matador of the Week: Meghan Lopez 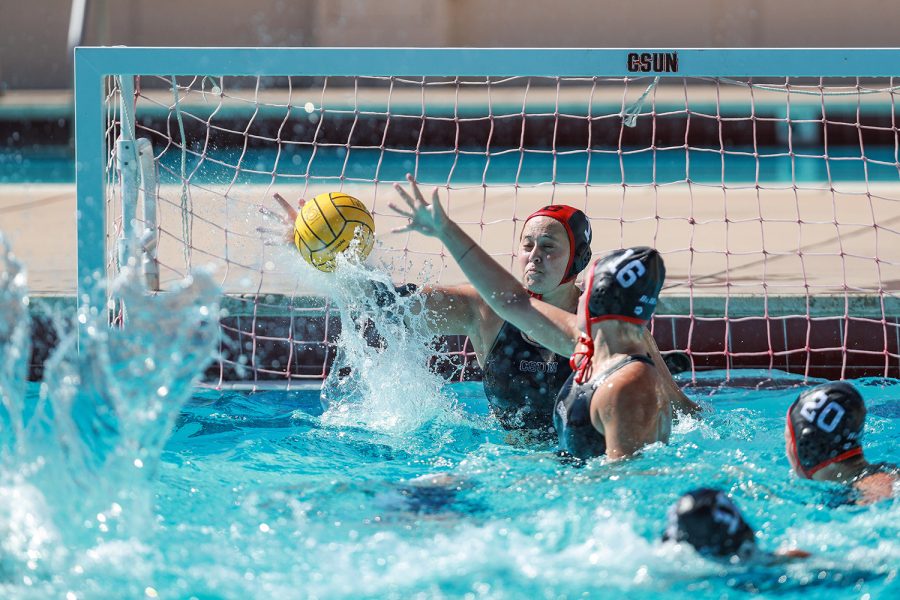 This week’s Matador of the Week goes to women’s water polo goalkeeper Meghan Lopez after her performance in front of the cage against Claremont-Mudd-Scripps, Pomona-Pitzer, and Whittier College.

Lopez had a total of 25 saves in the three-game span and played every minute of each game. She also scored a buzzer-beater against Whittier College to win and avoid overtime.

“I saw the goalie had moved over to my left. She moved over to her right,” Lopez said. “There was a field player blocking the right side of the cage, and I was like, ‘I can shoot over this field player.’ So I threw the ball and it went over the field player’s hand and into the cage.”

The 5-foot-7-inch junior from Brea, California, joined CSUN in 2020 and posted a 6-4 record for her freshman season. Lopez did not compete in the 2021 season due to the pandemic.

Lopez began playing water polo when she was 7 years old after her older brother Michael introduced her and her family to the sport.

“Whenever I’m in the water I try to give it 100%. Bring my best person to the pool, and just try my best the entire time,” Lopez said.

Outside of the water, Lopez is studying kinesiology sports studies and is minoring in psychology. She is not set on what she plans to do after college, but she does know that whatever it is, it will include helping people in some way.

One of Lopez’s inspirations is USA Water Polo Hall of Famer Stan Sprague. Sprague was her coach when she first started at 7 years old, and then her high school coach, where she played varsity all four years.

Before she even gets to the pool, she’ll listen to whatever her favorite music is at the time. Her pregame song at the moment is “Sunroof” by Nicky Youre and Dazy.

Lopez and the Matadors are preparing for the Big West Women’s Water Polo Championship that starts on April 21 and is hosted in Manoa, Hawaii.

“It’s more of fine-tuning,” Lopez said. “Trying our best every single day to finish out the season strong. I’m a goalie, so I’ll get in more reps for the field players to shoot the ball.”