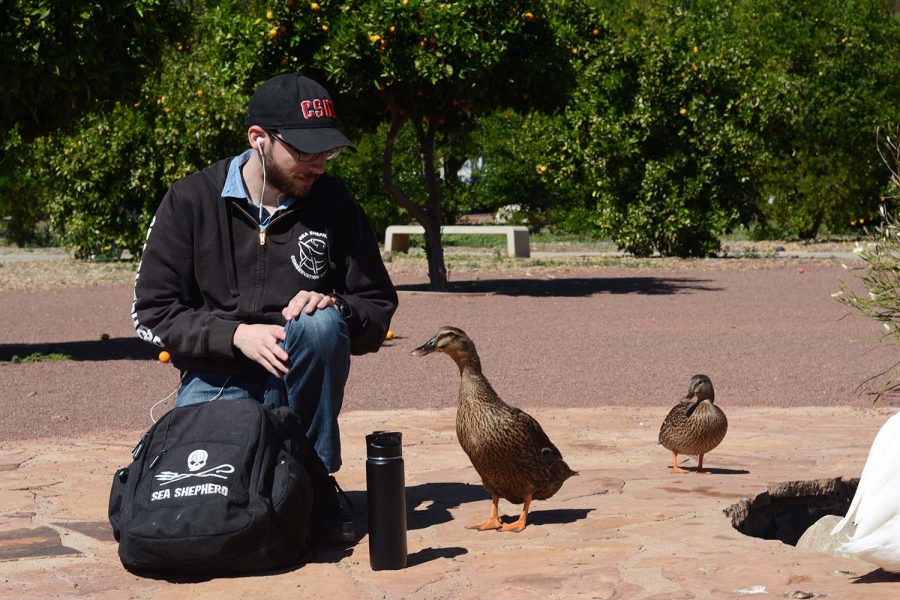 CSUN junior Nicholas Serras interacts with a duck at the Duck Pond on March 9, 2022, in Northridge, Calif.

Firsthand accounts about the pond’s turtles and their living conditions were revealed by Facebook group Friends of The CSUN Pond last year.

One complaint from a Friends of The CSUN Pond member summed up the uproar by writing, “I was at the pond today, and it’s worse than ever. More dead turtles — lots of them. The fish died because the water quality is so toxic. The filtration works commenced in February/March. This should have been finished months ago.”

Since then, the office of CSUN President Erika D. Beck has given senior Director of Physical Plant Management Jason Wang permission to hire a gardening specialist groundskeeper to supervise the pond and will be responsible for pond maintenance on a day-to-day basis.

Currently the grounds staff are solely in charge of overseeing the pond and primarily focus on the pond’s maintenance. The pond workers supervise the area three days a week.

PPM installed a secondary stream pump to provide backup to the stream system in case of a pump failure, allowing for one pump to operate while the other gets repaired.

CSUN’s campus closed-circuit TV camera system was expanded in and around the pond to ensure the safety of wildlife.

Officials are still uncertain what caused the deaths of turtles last year.

Respiratory issues and predation were named as possible reasons by Robert E. Espinoza, a professor of biology at CSUN.

“It wasn’t clear why they died,” Espinoza said. “Some had things that are consistent with respiratory infections. Some were killed by local scavengers like racoons, possums, skunks or coyotes.”

Last December, CSUN students in the department of biology, studying in the field of bacterial ecology, conducted an assessment of the water in the pond and came to a different conclusion for what may have caused turtle deaths.

The students found that the filter pump was an important part for maintaining the level of oxygen present and preventing a buildup of algae. The assessment also said that overgrowth of algae created toxins, which could potentially harm the turtles.

“Overgrowth of algae consumes oxygen and blocks sunlight from underwater plants, and when the algae eventually dies, the oxygen in the water is consumed,” the assessment read.

However, Espinoza claimed that the turtle species at CSUN can thrive in severely polluted, anoxic waterways like sewage outfalls, golf course ponds or even the Los Angeles River.

Concerns also arose from community members about overpopulation of wildlife being a factor for turtle deaths, but the pond’s population — approximately 200 to 300 turtles — has been steady for over ten years, said Espinoza.

All the wildlife at the pond, such as koi fish, common carp, mosquito fish, and most of the mallard ducks, are known as invasive species. They are highly adaptable to wide ranges of habitats and conditions.

“If the pond served no purpose for these animals, they wouldn’t be able to live in it,” Espinoza said. “In fact, the CSUN pond provides all the habitat needs for the turtles and other wildlife that use it.”

Regarding further funding for the pond, Wang says funding will be prioritized based on the pond’s value to the campus and surrounding community.

“Once the gardening specialist starts at CSUN, we will be looking at projects to improve the ecosystem including new plants, revising the pump systems and adding trees to the surrounding area,” Wang said. “Cost estimates have yet to be developed but will be supported as much as reasonably possible.”

Since the updates to the pond there have been three dead turtles reportedly caused by predation in the last nine months, according to Wang.