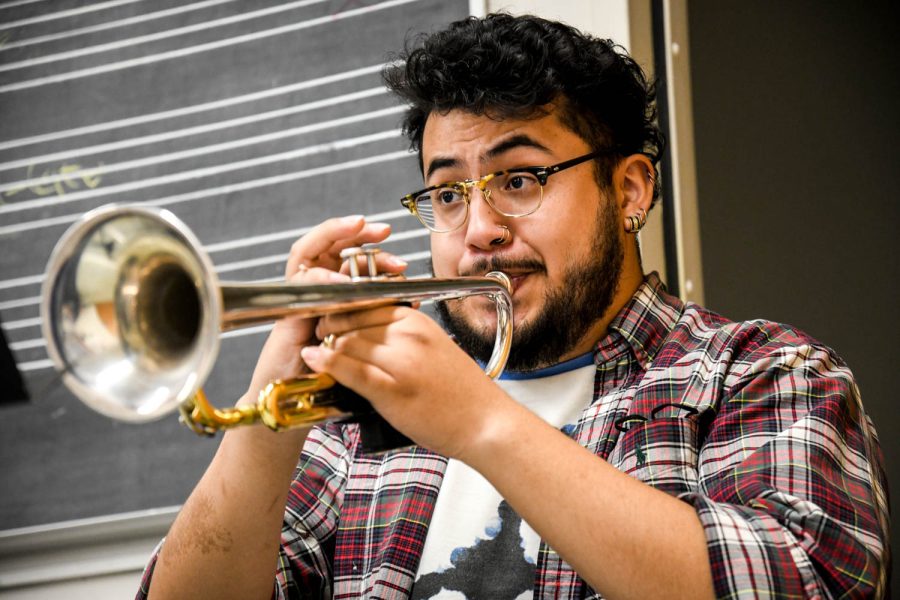 Ismael Lorzo plays the trumpet at a mariachi rehearsal at CSUN on Feb. 28, 2022, in Northridge, Calif.

As the Latino student population continues to grow at CSUN, classes about Latin music and its roots continue to play an important role in connecting students to their cultural heritage.

“The [Chicana and Chicano] studies department has made strides to create space for the arts, as well as [validate] it through its surrounding areas,” Sandoval said.

Fermin Herrera, a professor in the Chicana and Chicano studies department who teaches about the regional music of Mexico, feels that learning about regional music like mariachi is a right that every student with Latin roots should have access to. It can be a way for students to connect with themselves and their culture, but Herrera also believes that “it exists, and it is a beautiful form of learning about music.”

Los sones de mariachi, meaning the “sounds of mariachi,” is important to teach because students can better understand the origins of mariachi music, according to Herrera.

Mariachi originated in the western region of Mexico, which includes the states of Jalisco, Nayarit, Sinaloa, Colima, and Michoacán.

Los sones de mariachi is meant to be danced to the rhythm of its different instruments, such as the guitarrón, vihuela, trumpets, guitarra de golpe, violin and harp. The guitarron, vihuela and guitarra de golpe do not have a direct English translation, but are identified by the appearance and the sound that the instrument makes.

The music becomes canciones, which are songs that give the genre its vocal component, once the mariachi instrumentals are added to the genre’s distinctive style of singing, according to Herrera. Some of the more well known canciones are “Serenata Huasteca” and “El Rey.” The main goal of los sones and the canciones are to be felt, understood and danced to, Herrera expressed.

In CSUN’s Department of Music, students can learn how to play mariachi music through introductory mariachi courses for undergraduate and graduate students. The classes are instructed by Carlos Samaniego, who is also the director of Mariachi Arcoiris de Los Angeles, the first LGBTQ mariachi ensemble in the world.

The music department initially launched the class during the pandemic and faced some challenges, according to Samaniego.

“It was challenging because in order to be able to have the [mariachi] class, we have to be in person so the students can learn how to play the songs,” Samaniego said. “Even though it was a small group, we still managed to pull through and give a great spring performance [in spring 2021].”

Today, the main challenge they face as a class is ensuring that the students understand the historical and cultural value of the mariachi, all while preparing for their annual spring concert on April 13 at CSUN’s Recital Hall.

Despite some of the challenges the pandemic brought to the mariachi ensemble and other classes at CSUN, professors like Samaniego and Herrera are helping to keep the presence of Latin music alive on campus.

“We cannot turn away and pretend that [Latin music] doesn’t exist, because it adds to a firm grounding,” Herrera said. “It defines us and it is part of our heritage.”