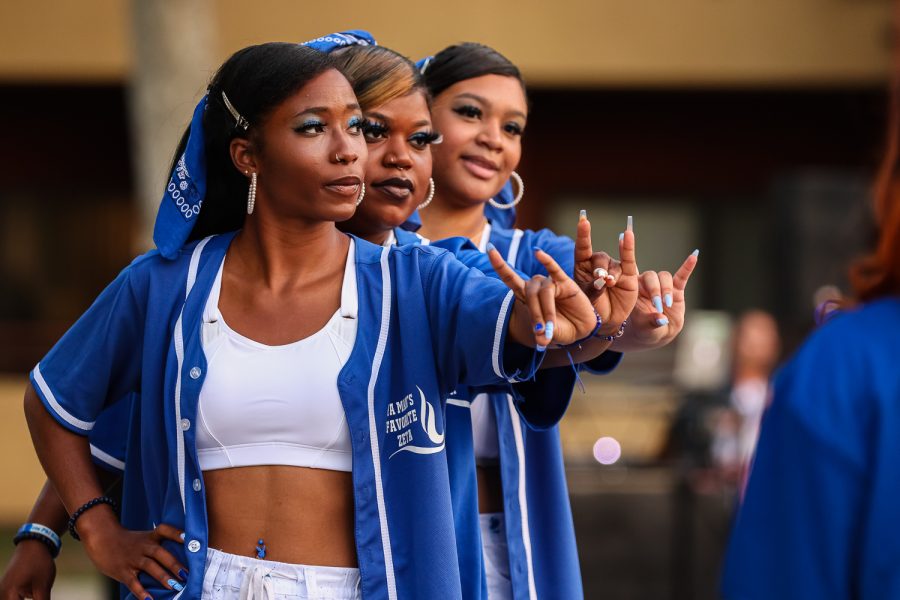 Zeta Phi Beta sorority members Kaila Moore-Jones, Dezha Boynton and Azshanay Hunt pose while their sorority sisters take pictures of them on their phones before the Spring 2022 CSUN Yard Show on April 1, 2022, in Northridge, Calif.

Decked in a variety of colors, from royal blue and gold to crimson and cream, Black CSUN students gathered in a circle with their respective groups. Calls, unique to each fraternity and sorority, were shouted by members and quickly followed by their group’s rehearsed response. Their shouts were only the prelude to a show filled with jubilation and lots of stomping.

The National Pan-Hellenic Council hosted the Spring 2022 CSUN Yard Show on April 1, its first since 2020. The “Divine Nine” Black Greek letter organizations sorority and fraternity chapters from CSUN, UCLA, and the Los Angeles area gathered on the basketball courts in student housing to connect with students through their traditional stepping and strolling routines.

According to CSDT, a cultural database supported by the National Science Foundation, stepping and strolling is a type of performance said to be inspired by Black drill teams, tap dance and similar styles that drew their roots from African polyrhythmic music, which is a genre of music where two or more rhythms are played simultaneously at the same tempo. Each new era of dance brings a fresh element to stepping. One such example is the contributions from breakdance and hip-hop that were added in the 1980s, which members still incorporate into their routines.

As a result of its history and sacredness, stepping has become an integral part of Black Greek life and culture as a whole. It has appeared in media like the 1990 “The Fresh Prince of Bel-Air,” the 2007 “Stomp the Yard” from director Sylvain White, director Spike Lee’s 1988 “School Daze,” and Beyonce’s famous 2018 Coachella set.

CSUN’s BGLOs got to show off their steps and strolls at the yard show to a crowd of excited students, parents and BGLO alumni.

Despite a lack of lighting that lasted throughout the entire event for an unknown reason, each participating sorority and fraternity made sure they could be seen and heard as they started the event off with their unique vocal calls. The Alpha Phi Alpha Fraternity, Inc., opened the event, then were followed by Kappa Alpha Psi Fraternity, Inc., Zeta Phi Beta Sorority, Inc., and Sigma Gamma Rho Sorority, Inc., amongst others BGLOs performing that evening.

Traditionally, each fraternity and sorority has their own symbols that they display during their routine.

It ended with a group dance that emphasized the communal aspect of this event.

This year’s performance was one of the final events that closed out the National Pan-Hellenic Council’s Spring 2022 NPHC Week, which lasted from March 28 to April 2. It kicked off with the Interest Etiquette and NPHC 101 workshops and included a variety of events to teach students about the NPHC and Divine Nine organizations.

Events like NPHC Week and the yard show help the BGLOs show Black students what they can do for their community through these fraternities and sororities, according to Derrick Lewis, president of the Alpha Phi Alpha Fraternity, Inc. Recruitment and exposing Black students to the Black Greek culture are big reasons why these shows are so important.

“This is really really important,” De’dha Boynton, a third-year member of Zeta Phi Beta sorority, said. “[The Divine Nine and other BGLOs] are an important part of Black culture and Black life, so having us come out to the yard show and seeing that we’re on campus gives them that [moment of], ‘Oh, we’re here. They’re here, so I can join this organization.’”

Angel Robertson, a senior majoring in psychology with a minor in Africana studies, had gone to previous yard shows that were held before the COVID-19 pandemic and believed that this year’s event had less people. She still enjoyed meeting new people and learning about more aspects of the BGLOs.

“I think the pandemic kind of, like, tore the community feel of [CSUN] apart because nobody was here, and it was vacant for a long time,” said Robertson. “I’m around my own people, out here that’s not usually common, at this school.”

Unlike Robertson, systems and operations management sophomore Kingsley Ekejiuba started his college journey at CSUN during the pandemic and was seeing the yard show for his first time in person.

“It’s a lot of energy. It’s a lot of people that I’ve never seen before, so it’s an opportunity for me to meet new people,” Ekejiuba said.

As society begins to return to normalcy despite the pandemic, BGLOs will have more opportunities to show off their stepping and strolling to the community. Regardless of the complications they may have faced during the yard show, Lewis is confident they will be able to continue cultivating that community feel on campus through these performances.

Editor’s Note: We adjusted our style guide and added “Inc.,” after each fraternity and sorority mentioned in the above story. We also provided additional context to the definition of stepping and strolling from CSDT.