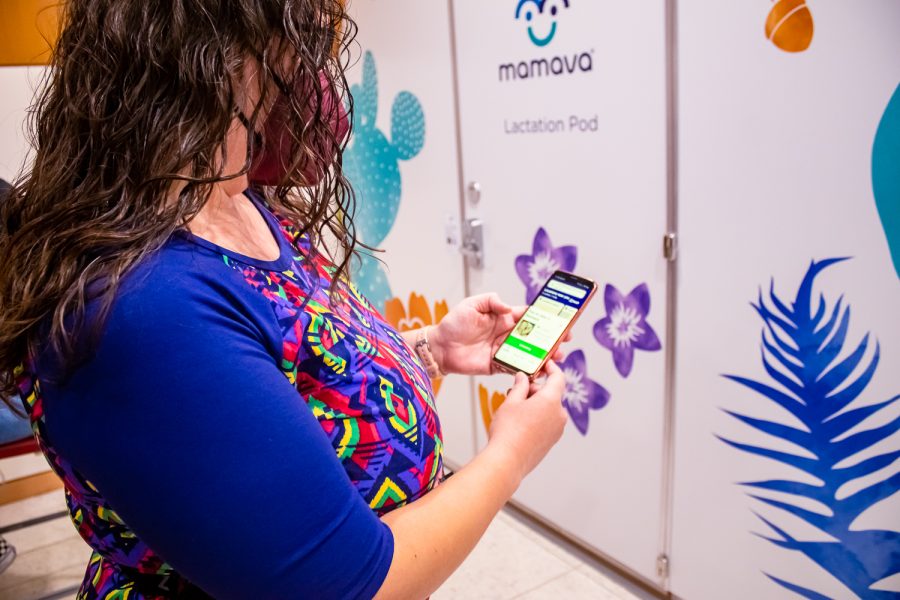 Kayla Kaiser unlocks the lactation pod with an app on her phone on Wednesday, April 20, 2022, in Northridge, Calif.

CSUN opened its first lactation pod on March 28 in the lobby of Bayramian Hall at the request of the university’s Institute for Community Health and Wellbeing, also known as the HWB. The pod is intended to give nursing individuals privacy to pump milk and it also has a range of features aimed at comforting parents.

The HWB has been working on lactation spaces since 2013, when the first space was created in Santa Susana Hall, according to Cassidy Butow, HWB’s administrative coordinator. The spaces are designated rooms on campus that parents can use to lactate. However, the bigger project was to purchase the pod.

The Mamava pod differs from the other lactation spaces because it is controlled by a phone app where lactating parents can verify if it is available for use right away. The app also has other features that help the parent enhance their pump experience.

“The lactation pod is very unique compared to other CSUN spaces because you can use the app to see if someone is currently using and once you are inside, you can play music, control the lights and create a different air flow,” said Aymie Ballesteros, a project coordinator for the HWB.

The location of the pod is in an ideal place on campus, according to Ballesteros.

“Bayramian Hall is the one place everyone comes in. It’s the first place you visit as a student or parent or faculty. The cash services, financial aid, international studies, they are all in that hub,” she said.

The pod feels like a safe space for Kayla Kaiser, a part-time faculty member in CSUN’s Department of Chemistry and Biochemistry who is in her lactation phase.

Kaiser said that all the features help her feel calm and connected to the pump as if her child was in her arms. She said it can be a strange feeling not having the child there while lactating.

“Sometimes women don’t respond well to pumping because their babies are not there,” Kaiser said.

Even though CSUN now has six spaces, she believes CSUN should expand its lactation areas throughout campus.

In cases of extreme weather conditions it is discouraging for Kaiser to go pump in another building. She works in Eucalyptus, Citrus and Magnolia Halls, all of which don’t have a lactation area.

“It would be nice to have it in other buildings. Right now there’s not even a lactation space in the building I work, so I have to pack all my things, go to the other building, unpack, pump, pack again and go back to work,” she said.

Kaiser believes that it is important for parents to have access to lactation rooms.

“As a woman and as a person, it is important to take out milk regularly, otherwise I can get [my milk] clogged and it can become infected and lastly cause mastitis,” Kaiser said.

Crystal Martinez is a sociology major at CSUN who utilized the lactation areas from 2019 to 2020. She said that she enjoyed using the university’s accommodations.

CSUN helped schedule her pumping sessions in buildings next to the ones she had classes in. Martinez also added that the spaces had refrigerators and microwaves, which helped her store her pumping materials. The university also allowed her to have access to the faculty and staff room, which had a sink to clean up whatever she used for pumping.

Butow said that, for now, there are no plans to purchase a new pod or expand the lactation areas.

“Rather than adding more spaces, it is needed to increase the visibility of the ones already here,” she said.

While Martinez thought CSUN’s accommodations for lactating parents were adequate, she thinks the school should do more to let people know about them.

Butow claims that using social media and putting up posters in restrooms, or other areas on campus where a lactating individual might go to pump, will help increase the awareness of lactation spaces.