Matador of the Week: Blake Sodersten 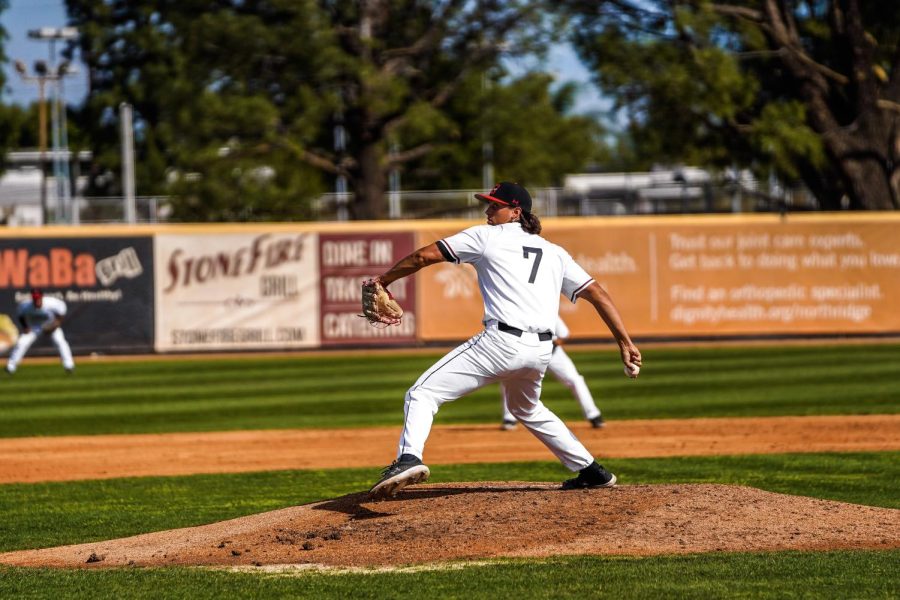 Blake Sodersten was chosen for Matador of the Week after pitching 6.1 innings in relief for a 2-1 win over Cal State Fullerton on April 23.

Sodersten came in during the third inning, pitching eight strikeouts while picking up a double play during the eighth inning to hold off a bases-loaded opportunity for Fullerton.

Sodersten always enjoys playing in high-pressure situations because he is able to stay calm and collected when he needs to be at his best on the mound.

“I always remind myself that I’ve been here before. I try to keep my head over my feet because it’s a privilege to play in those situations,” Sodersten said.

Sodersten’s pitching gave CSUN the win to tie the weekend series 1-1. The Matadors would go out and win the next game 5-2 to take a 2-1 series edge over Fullerton. The series win was the first time CSUN had beaten the Titans since 2002.

“It was something really special that won’t be taken for granted,” Sodersten said. “It’s an accomplishment that my teammates and I won’t forget for the rest of our lives.”

Sodersten is working to take the next steps of having a chance to be drafted during the next MLB draft. It’s a goal he has had throughout his entire baseball career. If Sodersten does not get drafted, he is planning on playing one more year at CSUN.

Sodersten believes that attending CSUN — an NCAA Division I school — gives himself the best chance to play professional baseball.

“I’ve always wanted to be drafted … Playing at CSUN has really given me a good chance at becoming a pro athlete,” Sodersten said.

Sodersten is majoring in communications with a minor in sports kinesiology, and wants to pursue a career training other athletes to help them take the next steps in their careers.

Academics is just as important as athletic training to Sodersten because of the opportunities they can lead to in the future. Sodersten has been named to the Big West Academic All-Conference Team the past two seasons, an accomplishment that means a lot to him.

“A good career in baseball and in school is going to open a lot of doors for me later on in life,” Sodersten said.

With 17 games remaining in the season, Sodersten is going to do everything he can to help the team finish with as many wins as possible, and hopefully get a spot in the playoffs.