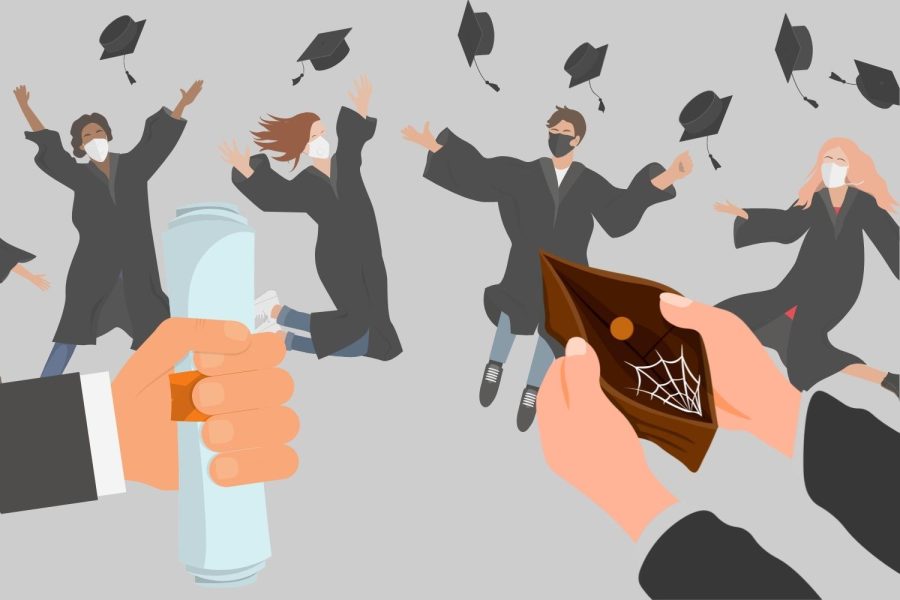 You have worked for this day for a long time. You have told your family and friends, and the anticipation is rising. Graduation is just around the corner and nearly in your grasp — if you can afford it.

As an individual who is graduating for a second time now in higher education, I wonder: why is it such a financial burden?

After paying semesters of tuition, parking costs, gas for commuting, food and other costs, being hit with yet another fee was a bit off-putting.

What does that amount consist of, you ask? Well, that would be the fee to apply for graduation, the cap and gown fee with the unforgettable $15 shipping, and the cost for my distinction/honors sash and cords.

In comparing the cost of only a master’s gown for commencement, it seems Herff Jones is the exclusive supplier for both CSUN and California State University, Dominguez Hills, as it can be common for universities to go through a private vendor. For CSUN, the cost of renting the gown online was $73, excluding tax and shipping fees. For CSUDH, it is $84 to purchase.

I think it is also fairly significant to note that, unlike CSUDH and California State University, Long Beach, which will hold their commencements at an off-campus rented site, ours will be held on campus.

So what does this money cover? Where does it go?

Upon further examination of graduation ceremonies of years past, there is not a lot of showmanship beyond a stage, speakers, some foliage and a few banners.

If my math is correct, that would mean there is a total of $3,035,700 allocated toward the three sections mentioned above. Since we are on the topic of math, the number of graduates for fall 2021, spring 2022, summer 2022 and fall 2022 are estimated to be 11,600 students, according to Yannelli Mejia, a commencement ticket coordinator. That number multiplied by the $47 graduation application fee works out to $545,200.

I know I have thrown a lot of numbers around, but here is the bottom line: to someone like myself, it would appear on the surface that there are enough funds for commencement, especially when choosing to hold it on campus property. I take into consideration there are a lot of chairs to rent, but I am not sure it is $545,000 worth, especially given that students have already paid for tuition and parking among other expenses.

Though I may be a tad bit salty about the almost $200 I paid personally to graduate, I cannot deny that I am still grateful for the chance to walk across the stage and completely forget all the hours I spent rehearsing how to shake someone’s hand and not trip on stage.

To my fellow graduates, I say congratulations! To my wonderful CSUN, and more specifically the commencement office, I say: can we at least get a snack with all that money?