Behind the scenes of CSUN’s fashion show 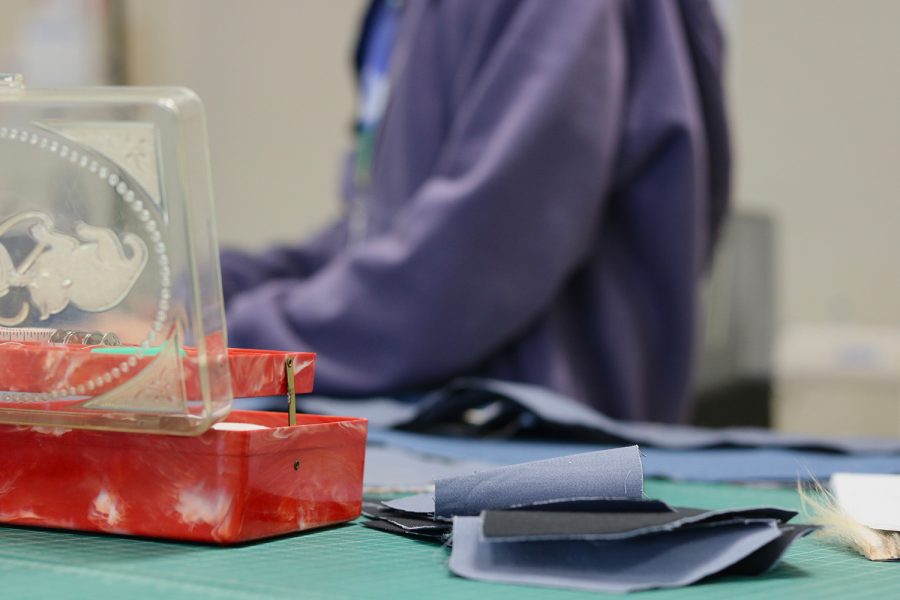 Strips of cut fabric lay next to a sewing kit.

Glossy audition posters with the words “Models Wanted” were posted throughout campus, inviting students to participate in a fashion show organized by TRENDS — a student-run organization that helps CSUN students gain the knowledge needed to work in the fashion industry.

As the club’s first in-person fashion show since the beginning of the COVID-19 pandemic, this year’s event was held at the Northridge Center Complex in the University Student Union.

In 2021, students were limited to showing their end-of-the-year fashion collections from their homes through Zoom. This year, they got the chance to display their work in front of an audience of family and friends on a physical runway.

Titled “Smoke & Mirrors,” the show was filmed on May 1 and debuted on YouTube on May 13. Apparel design and production major Veronica Hernandez created the theme for this year’s show, having gained inspiration from the unofficial “National Smoke and Mirrors Day.”

Hernandez felt that the essence of a holiday regarding magical illusions would guide the direction of the fashion show.

“It is known for being [about] illusions and trickery, all that kind of stuff, so I thought it would actually make a very interesting theme for a fashion show,” Hernandez said. “A fashion show is supposed to be something where it’s an event, where it’s just you taking in what’s been presented to you.”

The show was executed by a smaller group of creatives compared to last year. A select group of students who designed the show also worked on creating a magazine that includes photographs of the show’s designs, organized in the order each collection was presented during the show.

Students were in charge of planning the layout, editing and “making it look cool” for the fashion show, according to magazine designer and apparel design and production major Adam Pablo.

“Everybody’s going to be in the same environment as opposed to having a conference in their own home last year,” said Shirley Warren, fashion show producer and professor of apparel design and merchandising.

The students who worked on the show and magazine said it was a different experience to work in person as opposed to online.

“We’re going back and forth and checking out the venue in person. We’re speaking with each other in person rather than on Zoom, and collecting images. It was difficult back then,” said Elvia Almanza, the fashion show’s director and an art major with a minor in apparel design and merchandise.

The ability to meet in person provided a better environment for the show and magazine to come together.

“I feel like we have a really talented group and it’s just sort of like a mini-family. We just all care for each other and check on each other. I feel like it’s more productive that way,” Almanza said.

About 25 students presented up to five self-designed, runway-ready designs as part of their collections. Each outfit was created with a unique style and paired with music curated by the designers to compliment the models on the runway.

Every student designer had a personal audience of family and friends during the recording of their segment. Once their fashion collection was presented, the audience cleared out of the venue and guests invited by the next designer entered. Aside from these pandemic restrictions, the event was structured to be a typical fashion show.

For students in TRENDS, this fashion show offered them the opportunity to develop personally and professionally as they explore the many aspects of the fashion industry through this hands-on project.

“This show is a culmination of everything students have been doing over the course of the past four years,” Warren said. “They work hard to get to this moment. This is our version of ‘Project Runway.’ They have put in a lot of hard work.”