Services for deaf community not so available 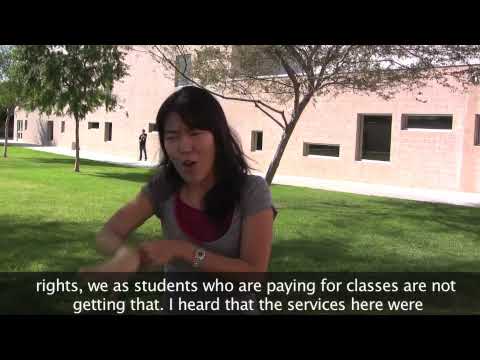 As the ripple effects of the budget crisis continue to touch the education of thousands, a communication studies class decided to take a stand to ensure that at least two students in their class were receiving the education they paid for.

Intercultural Communication Studies Class (COMS) 356 has two deaf students that since the semester began had not received interpreting services for five of their classes.

Nobuko Kojima, a senior geography major, was one of the deaf students in the class who had felt helpless after her interpreter failed to attend class.

On the interpreter’s third absence, the deaf students left class in tears due to the frustration they were feeling about not understanding what was going on.

“While the other students are able to hear in the classroom and still get their basic educational rights, we as (deaf) students who are paying for classes are not getting that,” Kojima said.

“Substitutes have never been easy to find since most requests occur on a last minute basis,” James Macaluso, the associate director of the National Center on Deafness said. “However, this semester has been especially challenging due to the furlough implementation.”

The lack of services readily available for deaf and hard of hearing students and faculty served as a catalyst for this class to look at the affects the budget cuts have had on all students.

The students in COMS 356 decided to take action into their own hands with the advice from Piccarelli, who since then has changed their course syllabus at the request of her students to add in “elements of social justice.”

Previously, interpreters were accessible to all. But now, with the pay cuts and furloughs, interpreters are capped and find themselves in a peculiar situation, Roslyn Rosen, director of the National Center on Deafness said.

This situation arose when the California Faculty Association (CFA) decided that furloughs were the most humane way to deal with the budget cuts without laying off teachers, thus interpreters were given a furlough in the form of hourly caps.

The hours interpreters can work have been capped by 10 percent, requiring them to reduce their hours and total days in the month they can work, said Student Affairs Vice President Terry Piper.

Under Section 504 of the United States Department of Education, colleges are required to accommodate students with disabilities yet it leaves it up to the college to decide what methods to apply.

Of 185 deaf or hard of hearing students on campus, 144 students require interpreters. Of those 144, 12 students did not receive their “original preference” and in lieu of an interpreter, were assigned captioning services, said Macaluso.

Interpreters’ hours are prioritized by educational importance beginning with classes, then by out-of-class requirements and finally optional services.

In order to continue to service students in accordance with their priorities, they have been cutting the hours they use to service deaf and hard of hearing faculty and staff on campus by reducing the access for “non-required student purposes,” Piper said.

What “non-required student purposes” refers to are activities such as student advisement and/or counseling services.

“Those students would be asked to use new technology and or alternate strategies for communication during their non-required student purposes,” Piper said. “We are not restricting this because we want to. We are doing this because we have to.”

“One of the unfortunate consequences of state budget situations is reducing options available for students,” Piper said.

Patrick Boudreault, associate professor in the deaf studies department, recognizes that the lack of interpreters has had an effect on students who require their services for outside classroom needs.

“Some students need counseling services and because they cannot communicate, the problem compounds, grades start slipping and they stop producing the way they used to,” Boudreault said.

“The system is not working right now and it is doubling the punishment for deaf students,” Boudreault added.

Since then, the students in COMS 356, on their own accord have begun to mobilize by splitting up into groups who build Web sites to post information, groups who organize protests, and groups who do research.

It is important to Piccarelli that this is not just a one-day event but that it continues into next semester.

“We are at a point where we are getting together and getting many people involved and making sure that everyone is involved rather than leaving certain minority groups out,” Kojima said. “We, as deaf students, are working to solve our problems and we want the entire campus to be aware of this.”

For now, Piper has promised to allocate money from the $100,000 Federal Stimulus Appropriation money to help provide more interpreting hours.

Yet, next semester brings no promise for a better situation. According to Piper, “next year will be worse with the budget cuts.”