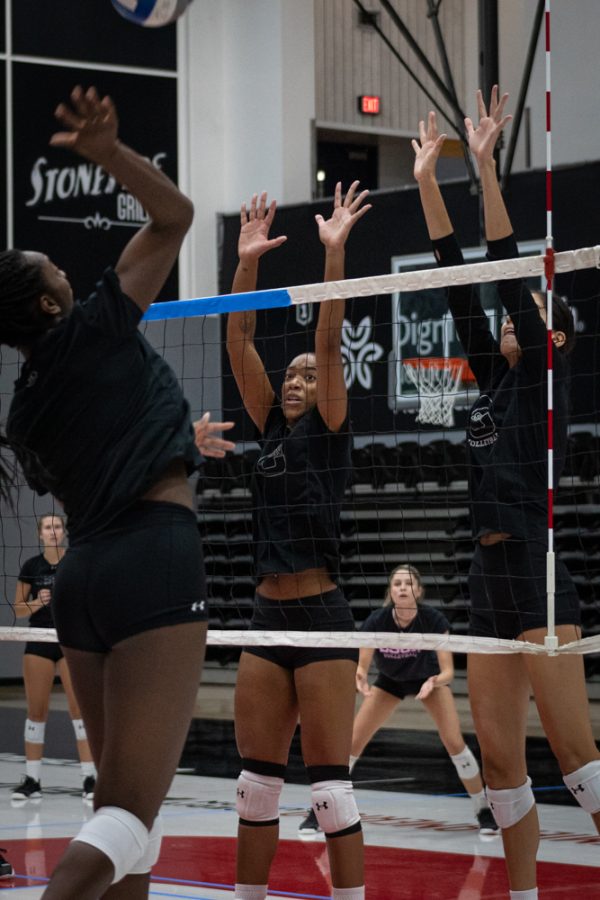 Lauryn Anderson jumps up to block her teammate's hit during practice in the Premier America Credit Union Arena in Northridge, Calif., on Wednesday, Sept. 14, 2022.

Coming off three consecutive losses at the Gonzaga Invitational a week before in Spokane, Washington, the CSUN women’s volleyball team set their sights on the next set of matches with a weekend trip to the Bay Area, securing two wins out of three matches played.

The first match at the University Credit Union Pavilion started off well for the Matadors (2-5) as they came out victorious in a 3-0 sweep over the University of Pennsylvania Quakers (1-3). The Matadors won the first set comfortably, 25-19, with blocker Lauryn Anderson gaining seven of her 13 total kills in this set.

Set two proved to be challenging for the Matadors as they trailed 21-17 approaching the match point. However, a 6-1 run gave the Matadors a 23-22 lead before opposite hitter Magdalena Juric’s kill helped them secure the set 25-23.

Lastly, the third set saw the teams tied at 11-11, until outside hitter Nicole Nevarez’s kill fueled a 5-0 Matadors run which would not only give the Matadors a commanding lead, but also a 25-22 final score in the set and 3-0 victory over the Quakers.

“My main focus when I step out on the court is to keep the team energy up and have the team be successful each match each week,” Anderson said about her focus heading into the match.

The second game saw the Matadors travel from Moraga to San Francisco for a night match, where they won a thriller against the hosts, San Francisco (7-1), 3-2. The match started off rough for the Matadors (3-5) as they lost the first two sets 25-18 and 25-19.

Facing adversity and a possible sweep, the Matadors used a 4-1 run to build a 16-10 lead into set three, taking advantage of an ace by Nevarez and a Dons hitting error. Outside hitter Taylor Orshoff then provided her sixth kill of the set, out of 19 total for the match, to secure a lead which the Matadors would not let go.

Set four had the Dons and Matadors in a 17-17 deadlock until a pair of kills by Orshoff and Carisa Barron ignited a 4-0 run, which helped CSUN secure a 25-20 set.

The final set saw the Matadors fall behind 6-3 until a Dons error and an ace and kill from Nevarez tied up the score. Both teams went back-and-forth in the set until the Matadors held a 14-13 lead and were set for the match point. However, the Dons answered with a run of their own and held a 16-15 match point advantage. Despite this, a kill by Orshoff and two more consecutive kills by Nevarez finally secured an 18-16 victory for the Matadors.

Anderson had plenty to say following the two victories against the Quakers and Dons.

“The difficulties are there going from one game to another, you need to prepare for each team seperately,” Anderson said. “It’s all about staying focused and staying in the game.”

To conclude their three-game journey in the Bay Area, the Matadors (3-6) returned to Moraga where they faced the hosts, Saint Mary’s (2-4). Despite coming off an incredible come-from-behind victory over San Francisco, the CSUN Matadors had no answer for the Gaels, as they were swept 3-0.

Set two proved to be the closest set between the two teams. An Anderson kill and a Saint Mary’s error gave the Matadors a 14-13 lead, but a 5-1 run by the Gaels saw them retake the lead and pull away with a 25-21 set win.

The final set saw the Matadors trail 12-3 early on, and despite kills from Anderson and Nevarez cutting the lead to 7, the lead was too much for the Matadors to handle as they were overwhelmed 25-11 in the third set.

Even though they concluded the tour with a loss, the Matadors were able to improve their record to 3-6 and win two of the three games played over the weekend.

Since then, the Matadors played their last tournament before the Big West Conference competition begins, winning two out of three matches in Tucson, Arizona, from Sept. 16-17.

They will start competition against fellow Big West teams Friday at UC Irvine.