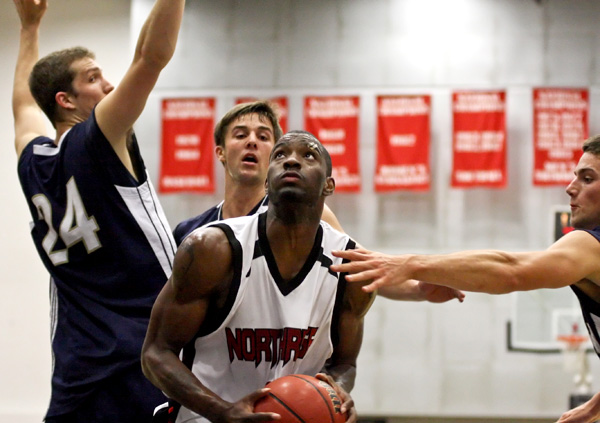 The Cal State Northridge men’s basketball team (1-2) was outrebounded by the Bobcats 46-25, missed 16 free throws and recorded 23 turnovers. Northridge was heading towards an 0-3 record to start the season.

Until Rashaun McLemore three-pointer started a 7-0 run for the Matadors that tied the game at 78-78 in the waning minutes of the game.

Tuesday night in the consolation game of the NIT season tip-off’s West bracket, CSUN got their first victory of the year, beating Texas State 85-82. Kenny Daniels led the Matadors in points setting a new career high with 27.

Daniels was crucial for Northridge down the stretch, knocking down a three-pointer, then getting a bucket to give CSUN their first lead of the second half at 80-79. Soon after Daniels got a steal and got the breakaway jam to give the Matadors the three-point lead.

The Matadors got a couple of free throws by seniors Mark Hill and Willie Galick to ice the game.

To begin the game, head coach Bobby Braswell played around with his starting lineup, hoping it would give his team a better start than the first two games of the year. He removed point guard Mark Hill, who has been struggling on the offensive side, and replaced him with junior transfer Dathan Lyles. Also Raymond Cody and Michael Lizarraga got their first start of the young season. Daniels and Galick remained as starters.

At first it seemed Braswell’s new starting unit was paying off as the Matadors got off to a hot start. Northridge built their first double digit lead of the season after going up 20-10 but soon after the Bobcats went on a 9-0 run.

Eventually Texas State would surpass Northridge and went into the half with a 51-46 lead.

In the second period the Matadors never let Texas State get a huge lead and they just kept chipping away.

The Bobcats kept Northridge in the ball game by giving up 30 turnovers and missing 13 free throws.

Hill was only able to score one point and record two assists. If Hill doesn’t turn it around soon, other guards like Vinnie McGee, who scored ten points against the Bobcats, could bump him off the starting unit.

Cody shined in his first ever start in a Matador uniform, scoring 12 points. Galick had a respectable 13 points and grabbed six rebounds.

Northridge improved their three-point shooting by knocking 9 from long range.