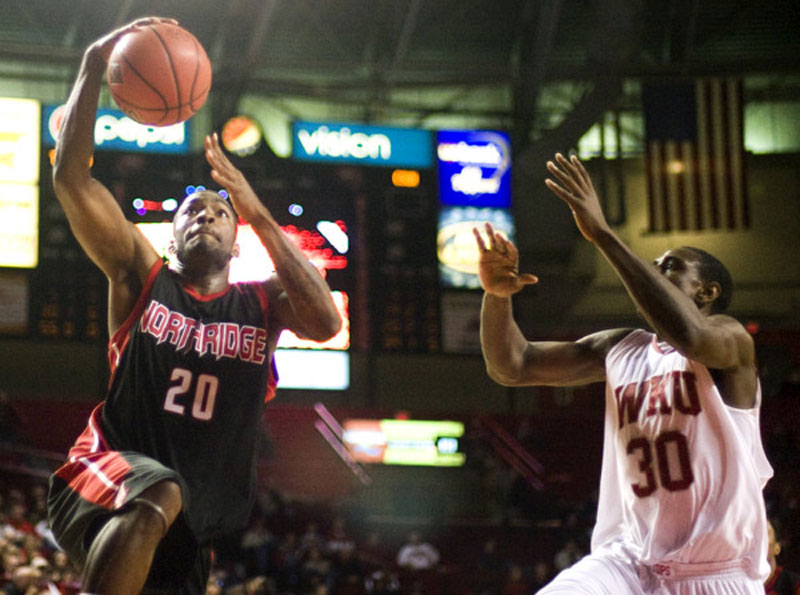 The worst way to end a basketball game is having the referee blow the whistle on a ticky-tack foul when the game is on the line. Too many times do you see the ref send the home team to the free-throw line when they have the ball in the final seconds of the game and they’re down a point or two.

Once again the officials took the game out of the players’ hands, and this time Cal State Northridge (1-3) was the victim.

Western Kentucky’s Anthony Sally had the ball in his hand with four seconds left in the match and with the game tied up 67-67. Sally crosses paths with Willie Galick, drawing the referee, from the Big East Conference, to call the blocking foul.

“For some reason this season the referees are quick to blow the whistle on fouls,” Galick said.

Sally misses the first free throw but was able to convert on the second shot, giving the Hilltoppers a one-point lead.

Matador Mark Hill shot a desperation three-pointer at the buzzer and was unable to drain it, giving Western Kentucky the 68-67 victory Monday night in the consolation round of the preseason NIT. The Hilltoppers extend their home-game winning streak to 15 and have now won 29 of their last 30 games at E.A. Diddle Arena.

The Matadors had the lead for the latter part of the game and even had a 63-58 lead with 2:01 left in regulation. Soon after the Toppers went on a 9-1 run, giving them a 67-64 advantage with 20 seconds left. Northridge could have called it a night there, but a clutch three-pointer by senior Vincent Cordell would keep them alive for a few more seconds.

Northridge was able to slow down A.J. Slaughter, one half of Western Kentucky’s dynamic duo. Slaughter finished the game with 13 points and three assists. The other half of the duo, Sergio Kerusch, lit up the Matadors with a game-high 24 points.

The Matadors could have won the game easily if they would have taken care of the basketball. CSUN converted 24 turnovers to Western Kentucky’s 15.

Junior transfers Lenny Daniel, Kevin Menner and Rashaun McLemore struggled throughout the ball game by giving up turnovers and committing careless fouls. Daniel only managed to get two points, and Menner had zero points with four turnovers. McLemore had a game-high six turnovers.

For the second consecutive game, head coach Bobby Braswell decided to have Hill come off the bench. Hill took that as a wake-up call and decided to do what a point guard is supposed to do: run the offense. Hill finished with a season-high 11 points and five assists.

Kenny Daniels was once again the Matadors’ leading scorer with 19.

In the first half Northridge was able to contain Slaughter, the Sun Belt Conference’s preseason Player of the Year. He scored the first bucket of the game, but he wouldn’t score again until 7:37 left in the first period. Slaughter, who came into the game averaging 20.5 points per game, was only able to score 6 points in the first 20 minutes.

Northridge gets back on the hardwood today at 2:30 p.m. against Coastal Carolina in their final game of the NIT. Listen online at GoMatadors.com for play-by-play action.