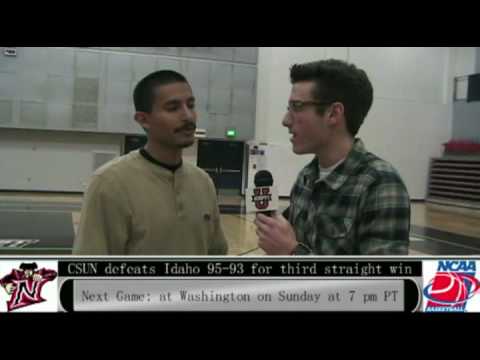 Kenny Daniels and Vinnie McGhee have said that every night, they go to the gym and shoot 500 jumpers.

Recently their extra workouts have been showing on the court, as they have been the Matadors’ two top scorers in the last two games.

In CSUN’s 95-93 victory over Idaho Thursday night at the Matadome, Daniels erupted for a career-high 39 points, which were the most points scored by a Matador player since Mark Cooley scored 40 points at Cal State Fullerton on Feb. 18, 1967.

Daniels went 13-of-15 from the free-throw line and knocked down 12 of his 17 shots from the field. He also recorded 10 rebounds.

“It’s just me in the gym every night working on those moves, and it’s paying off,” said Daniels about his improved performance as a scorer this season.

Daniels’ scoring frenzy puts him third for most points scored in a single game by a Matador behind Cooley’s 40 points, and Ollie Carter’s 47 points against Westmont College on Feb. 1, 1966.

Daniels wasn’t the only reason why the Matadors (4-3) were able to beat the Vandals (4-2). Bench players Therin Taylor and McGhee came in to give the Matadors a huge spark when the team was down 14 points in the second half with 15:43 left in regulation.

“They need to be ready and step up and have a competitive mindset, and I thought those guys had that tonight,” said CSUN head coach Bobby Braswell about Taylor and McGhee’s play. “That’s two games in a row (in which) both those guys really played huge for us.”

After scoring 19 points in a win against Cal State Bakersfield Monday night, McGhee scored 14 points and shot a perfect 4-of-4 from three-point range.

“I’m very proud of Vinnie (McGhee) cause that’s my partner. We come in to shoot every night,” Daniels said. “So when he hits a three I feel like I hit one because we shoot them every night.”

A big reason why the Matadors were behind for a big chunk of the game was the poor defense on closing out on the Vandal shooters, who knocked down 11 three-pointers.

“We challenged our twos and threes,” Braswell said. “We had to guard their two-men and three-men better than we did (in the first half). I thought we did a better job in the second half.”

Vandal Steffan Johnson, who transferred from Pacific, went off on the Matadors in the first half by scoring 13 points. Taylor was then given the duty of trying to cool off Johnson in the second half; he only allowed him to score three points.

“I just wanted to make it hard for him (to shoot jumpers) and make him take bad shots,” Taylor said about guarding Johnson, the former Tiger.

The Matadors erased the 14-point deficit after Daniels scored a bucket to tie the game at 73 with 7:46 left in the game.

Down the stretch Lenny Daniel took over the paint on defense by contesting every Vandal shot and even making two blocks that made the Matadome erupt. Daniel finished the game with 11 points, eight rebounds and five blocks.

Free throws by Daniels and Mark Hill iced the game for the Matadors.

Vandal Kashif Watson scored 21 points and went a perfect 15-of-15 from the charity strip. Mac Hopson had 19 points and six assists.

Next up for the Matadors is a trip to Washington state to face the No. 10 Huskies, who lost to Texas Tech in overtime Thursday night. Tip-off is scheduled for Sunday at 7 p.m.