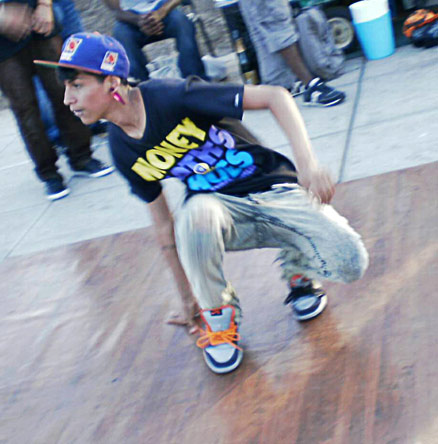 Thirty years after hip-hop was born in the Bronx, N.Y., many of the people who were at the first block parties, heard their first rap or beat box, and saw their first breakdance did not imagine what it would become, or the places the genre would reach. Not to mention the influence it would have on the generations to come.

More than 3,000 miles away in Los Angeles, hip-hop has helped influence a dance movement called Jerkin’. The origin of the movement is still unknown, but one thing that is clear is that it helps high school students, like Liddo Prince from the 818 DGK Krew, stay focused on their dancing.

“Jerkin’ keeps me off the streets. It makes things clear so I can stay out of trouble,” Liddo Prince said. “All my friends here make me want to stay up and go with them to places just to jerk and have fun.”

Jerkin’ has become more than a dance; it has become a fashion statement. Gone are the days when it was cool to wear baggy pants and dark colors. All of that has been replaced by skinny jeans and tightly fitted bright colors.

“I am more in to my style, how I look,” 818 DGK Krew dancer Kidd said. “Before I had a shaved head, baggy pants, three-X shirts, but now I have fitted clothes, skinny jeans ‘geeked up’ as we call it.”

The dancing involves low-to-the-ground legwork, the dancers are constantly moving and need the ability to crouch, balance on one leg, stretch out the other, and then bounce and spin. Some of the signature moves include the “Reject,” which is the running man in reverse, the “Pin Drop,” which is balancing on one leg while the other leg goes behind the balanced leg to allow to drop to the ground, and the “Sponge Bob.”

Many credit the New Boyz, made up of two friends from L.A., Ben J and Legacy, for putting this new dance craze on the map thanks to their song “You’re a Jerk.” Yet it is unclear where exactly it originated, but Kidd said, “It was called the Hoover Dance, which started in the (juvenile) halls. It started off as a gang dance. People would throw up their sets, as in their gangs’ signs, and from there on, it went on as a dance.”

When it comes to the music, Jerkin’ has a big hip-hop influence, with its explicit lyrics and hard bass line with a high tempo of around 90 to 100 beats per minute. The fashion is more of a skater style of neon colored tight-fitted clothes, flannel plaid shirts, vest, skinny jeans, bright-colored hats to match your clothes and kicks from Vans, Jordans, Nike dunks or any kind of skateboarding shoes. It is basically mixing the fashions of the 80s and 90s.

How long will this new dance craze last, and what influence will it have on this generation is unclear, because it was just a few years ago that another form of dancing, Krumping, disappeared after the 2004 documentary “RIZE.” The film told the story of Krumping as an underground  dance phenomenon that evolved as an escape from the everyday violence they face in their neighborhood.

“Music movements go through a 10-year period where they either grow or simply disappear,” said Beto Gutierrez, a social movement professor at CSUN. “Take a look at what Reggaeton is going through right now as an example.”

Music in general has a way of influencing people in many ways. But Jerkin’ has gone past the music and created a movement, and a positive one at that. Time will tell how far this movement will go and whether it has a strong enough pull to reach the masses outside of Los Angeles. For now, many of the youths are happy with just knowing they have an outlet to express themselves through dance.