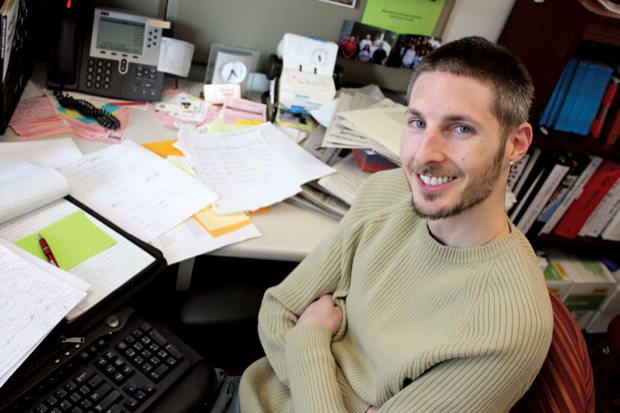 Justin Weiss is coordinator of Unified We Serve, the volunteer program that plans to raise funding through a series of events this semester to help victims of the Haiti earthquake. Photo Credit: Hannah Pedraza / Photo Editor

Unified We Serve will launch its program this spring by helping Haitians devastated by the 7.0 magnitude earthquake.

“We will have a slew of different events,” said Justin Weiss, coordinator of the program. “We are focusing on monetary funding and not supplies because I’ve done research and the organizations are not taking supplies right now since there is no way to get them there.”

Drop off stations across the campus will be provided so students can drop off relief, said Weiss. Fundraising will also take place at different events held by clubs and organizations, he said.

As time passes and the government asks for food and clothing donations, they will move on to collect these items, said Weiss. For now, their ultimate goal is to raise as much money as possible, he said.

“We’re trying to get a huge turnout of money, so the more students, the better,” said Weiss. “We also want students to get past that mentality of ‘it had nothing to do with me’ or ‘I don’t know where Haiti is to feeling the need that this is a humanitarian issue, they’re people just like us, they need help just like anyone else would in that condition.”

Weiss said an action committee has been started to focus solely on this issue. The committee is planning a benefit concert in mid to late February and looking to partner with Associated Students and the University Student Union, Weiss said.

Unified We Serve began in the fall of 2009 by hosting several events including Survive the Night, an event held as part of Homeless Awareness Month. Weiss said the event was a big factor in motivating participants to get involved in service.

“Students who have a passion for getting involved and doing service, this is the place for them,” he said. “We are trying to unify the whole campus, so whether you are a student, faculty or staff member, if you’re on this campus we want to get you involved to unify so we can serve.”

Pan African Studies and political science major Jillian Banks is involved with the program and is confident that Unified We Serve will be a success.

“Success is not measured by the amount of money you make per year,” Banks said. “Success is measured by the joy and happiness you bring to other people’s lives. We offer a lot of services and open our arms to everyone – we are a family.”

Ryan Mason, a fourth year sociology and Pan African Studies major who participated in Survive the Night, is looking forward to getting involved in the events the program has planned and encourages others to do so as well.

“Survive the Night was a humbling experience because we take a lot of things for granted,” Mason said. “It allowed us to really tap into our empathy and understand and try to change the situation that many people are facing.”

Unified We Serve also helps students get involved in other organizations they may be interested in working with, said Weiss. The main point is to get involved and help your community, he added.

Aside from their involvement in raising funds for Haiti, Unified We Serve will be focusing on issues such as access to education, educational equality, the environment, health care, and international issues, said Weiss.

Students who are interested in getting involved with Unified We Serve can contact Weiss through the Matador Involvement Center, he said.

“By getting involved in the program, members will also gain experience,” he said. “It will be good for their resume, they will get hands on skills in doing certain tasks, but more importantly, members will play a large role in helping their community.”