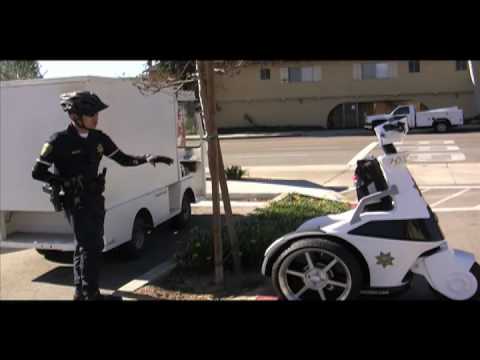 The police and parking enforcement at CSUN are testing out T3 Motion electric stand-up vehicles in an effort to save money and increase eco-friendliness on campus, said Chief of Police Anne P. Glavin.

In lieu of the statewide financial crisis, Glavin said, the police department needs to look at budget reductions.

“One of the biggest operational costs is gasoline for our fleets,” Glavin said.

This black and white electric vehicle is neither a scooter, nor a Segway. As noted on the T3 Motion Web site, the vehicle can range in speed from five to 25 mph, and its holding capacity is up to 450 pounds.

Standing at about 4.5 feet tall, the vehicle can have the classic red and blue police LED lights installed inside of it, said Glavin. The T3 offers an elevated view with its nine-inch raised platform according to the Web site, which Glavin said helps with visibility and parking enforcement.

Police officer Michael Reyes, who works on inner-campus streets at CSUN, started testing the T3 several weeks ago, and said the vehicle is useful when patrolling events on campus. Before testing the new vehicle, Reyes mainly rode in a patrol car and on a bicycle, which he said hurts after a while.

Glavin said using the T3 will reduce the cost of gas prices, and this reduction will promote a more eco-friendly fleet. The University Police Department has two T3 Motion electric stand-up vehicles, while Parking Enforcement & Traffic Safety has one.

The T3 already replaced two end-of-life Ford Crown Victoria automobiles and this electric vehicle costs around $16,000, which is about half the cost of an average police car, she said.

“We want to be as green as we can, whenever we can,” Glavin said. “We are trying to minimize police vehicles while maximizing variety.”

Some students such as Marcial Soto, 21, a junior majoring in political science, questions the usefulness of the T3 Motion vehicles on campus.

“I think it supports the idea that technology makes people lazy,” Soto said.

Soto first saw the vehicles being used on Hollywood Boulevard, and he thinks a criminal could easily evade a police officer on a T3.

Eric Tuazon, 23, who is working on his teaching credential at CSUN, first saw the T3 while walking around campus. Tuazon said police officers would prefer these vehicles because they can easily maneuver them around campus.

“In terms of fighting crime, surprisingly, it might be a good idea,” Tuazon said. “It’s faster than running.”

Along with this, Tuazon said police do not have to exert as much energy on the job when using electric vehicles.

The CSUN parking division started using the T3 four months ago while police began testing the vehicles in November, Glavin said. However, she added that law enforcement began using the T3 in 2005 and 2006.

Though there are concerns about the amount of equipment the T3 can hold, Glavin said it is still too early to comment on any major disadvantages of this vehicle. The CSUN Department of Police Services plans to evaluate the T3 Motion at the end of the year, added Glavin.