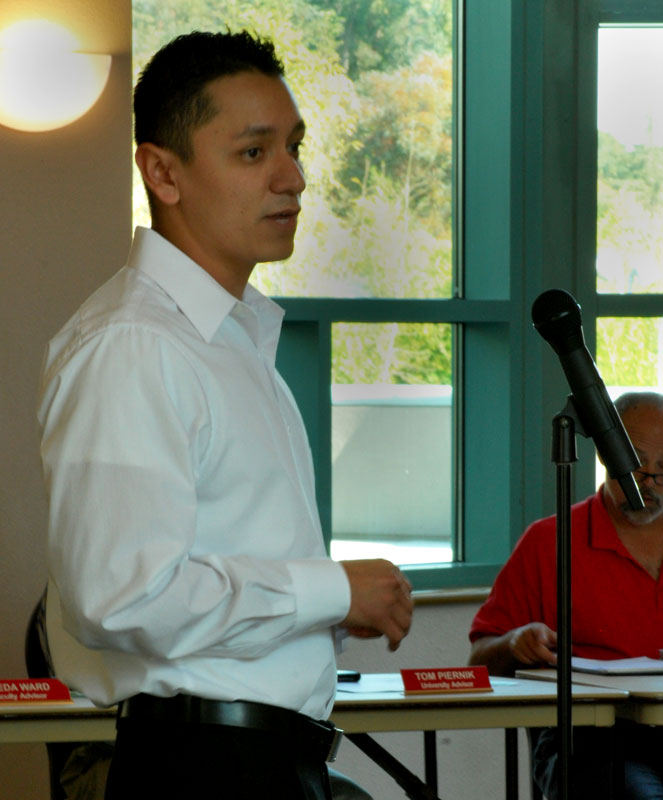 “We’ve been trying to start up the organization for two years now, but it’s just come into fruition now,” said Elmer Solis, founder and president of SVO.

The SVO advocates for all of the veterans on campus, Solis said. A huge influx of veterans are coming in and they have to deal with added illnesses such as post-traumatic stress disorder on top of school stress. People on campus should be more aware, Solis said.

“A lot of the times when veterans come back to school, they wish they could make the adjustment easier with a support group,” Pacheco said. “ I’m glad there’s a club out there that supports veterans.”

Lansdale added that he couldn’t be more supportive of veterans supporting veterans, especially now in a time where the U.S. is fighting in two major conflicts.

As a newly established organization, the top priorities are spreading the word and participating in outreach programs, Solis said.

“We have to set a presence before we can move onto anything big,” Solis said.

This semester, the SVO is working closely with Sigma Phi Omega, the National Academic Honor and Professional Society in Gerontology, Solis said.

“When older vets communicate with younger vets, it’s a win-win,” Solis said. “They feel forgotten and we’re here to tell them they’re not.”

The SVO also works with a non-profit organization off campus, Solis said. Right now, they are helping pack boxes for Operation Gratitude that will go to Iraq, he
added.

“I want the Student Veteran Organization to be more community based,” Solis said. “Hopefully we can start to communicate with other associations. Instead of secluding themselves, the better option is to go out and be involved in the community. It’s therapy without calling it therapy.”

Solis said he hopes to distribute a document to help teachers and students learn the best way to communicate with veterans. Written by a former captain in the U.S. Army Nurse Corps to the CSUN community, 10 Things You Should Know to Help Bring the OIF (Operation Iraqi Freedom)/ OEF (Operation Enduring Freedom) Veteran All the Way Home discusses misconceptions and truths about veterans.

“A big misconception is that people think in order to be in the military, you have to be in uniform,” Solis said. “Also, one of the biggest things in the classroom is that people don’t know what to do with people with this kind of background. The professors treat everyone in lower division classes like they’re 19 or 20 and they
don’t understand when the person is more experienced.”

Solis said he started to hear stories from veterans all over campus that were disheartening. Some people hate the veterans because they’ve been to war, Solis said. They believe that all veterans agree with the war, but that’s not true. They also don’t understand that people don’t have to have military status to have the same mindset as someone who is in the military.

The organization keeps in communication with about fifty people, but very few can attend the meetings, Solis said. Now that SVO has been approved by A.S. as an official organization, Solis said he is hoping to obtain a room for regular meetings on Thursdays.