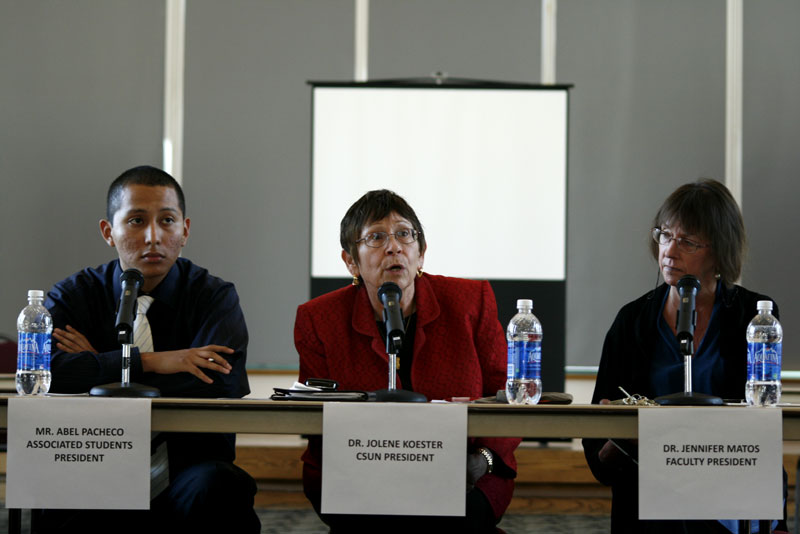 The event, which was held in the Grand Salon of the University Student Union (USU), gave students an opportunity to ask questions and voice their concerns to the university presidents, which included Koester, Associated Students (A.S.) President Abel Pacheco and Faculty President Dr. Jennifer Matos.

“We will be reducing our enrollment by 11 percent for fall and spring of 2010-2011,” Koester said. “This year we decreased enrollment by six percent. Choices for classes will be limited because we’re expecting fewer students.”

Koester said CSUN must keep enrollment at low levels because of the $41 million state budget cut. Those affected include incoming freshmen, transfer students and current students, she said.

Students in attendance voiced their concerns with the lack of open classes. One of those students, Jose Perez, 21, sociology major attended the meeting because he wanted to know what is happening with classes next semester.

“Are you investing more money to give more classes to students?” Perez said.

Koester said the administration keeps track of students’ Average Students Load (ASL), which is the amount of classes the average student is enrolled in every semester. Because there are fewer freshmen this year, the ASL this semester is almost the same as last semester, Koester said.

Another student concern was super seniors who have more than 130 units and are taking priority when enrolling in classes.

“These students are taking the place of students and using the subsidy of the state of California,” Koester said.

Koester said a change to title five allows universities to graduate these students.

“Students should allow there to be (spots) for other students to receive their bachelorette degree,” Koester said.
Koester said she does not encourage students to choose a double major.

Another student in attendance, Tasneen Koleilat, 21, biology major said she was worried about classes involving lectures paired with labs.

Koleilat expressed concern over the fact that students enrolled in science courses requiring a lecture and a lab have a difficult time enrolling in the courses if they have failed the lab.

“If a student fails the lab part, but gets an A in the lecture, they still have to re-take the lecture and lab,” said Koleilat.

Matos, who is also a biology professor said that in her classes that include a lab and lecture The student receives the grade they earn.

“To have courses be coupled like that is tough for both students and faculty because we have to be consistent on what is being talked about in both the lecture and the lab,” Matos said.

“Mobilization for Education” is a statewide protest that is scheduled to occur across Cal State University campuses.

Pacheco said he and A.S. support students’ mobilization efforts and that he will be involved during his free time.

“I feel if you have the free time and energy to participate on March 4, by all means do it,” Pacheco said. “I 100 percent support marches and rallies, but my concern
is students ditching classes.”