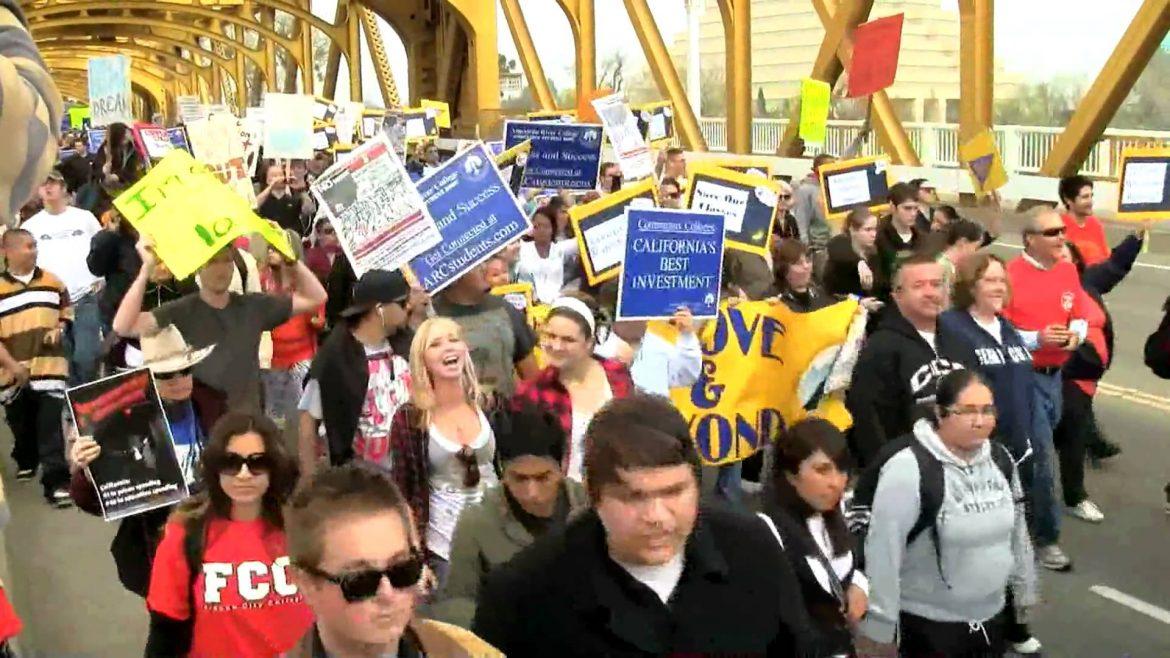 SACRAMENTO, Calif. – CSUN students along with other students and faculty from across the Golden State who rallied on the steps of the Capitol against budget cuts were encouraged by speakers to continue their activism even after the March in March event was over.

The event’s master of ceremonies Reid Milburn, student senate for California community colleges president, said change depended on the more than 15,000 students including CSUN students that marched to the Capitol on March 22.

“It doesn’t end here,” Milburn said. “It’s up to each one of you to go back and talk to legislatures. It’s up to us to rescue education.”

The trip to Sacramento was a follow up to the Associated Student’s postcard initiative held last semester, said Neil Sanchez, A.S. attorney general. Students from CSUN’s  Movimiento Estudiantil Chicano de Aztlan (MEChA), Central American Student Association (CAUSA), the Black Student Union (BSU) and Students for a Better Education (SQE) were among some of the participants.

Sanchez said that after the March 4 walk outs, A.S. became aware that students wanted to become more involved in events like the rally. Sanchez added that the trip to Sacramento had been planned in conjunction with the California State Student Association (CSSA) and an invitation was extended to students willing to participate.

One of the students participating was senior Danny Santana, a member of MEChA and Students for a Quality Education (SQE), who said he was participating to send a message to the governor and the chancellor about the negative effect the budget cuts are having on education.

CSUN grad student Dom Lupisan, said he attended the rally in support of education because he wants to go in to teaching and the effects will continue to affect him even after he graduates.

Lupisan, 27, said he thought the rally was more effective than the March 4 protest as students were taught through workshops how to effectively lobby.

“We have an understanding of why we are here and we are all on the same page and know this is a prolonged battle,” Lupisan said.

Senior Justin Marks, 22, one of the workshop coordinators, said the workshops held before students’ departure from campus where to inform students on how the budget crisis is affecting education.

“The workshops were to educate, to create comradity and create synergy within our own campus,” Marks said.

CSUN students arrived in three buses to Sacramento on March 22 to join others at the Raley Field where a crowd gathered in anticipation of the one mile walk to the Capitol.
Students from the three tiers of California universities began to march holding signs and banners around 10 a.m. chanting “hey, hey hoho budget cuts have got to go.”
Once on the Capitol steps a mix of speakers addressed the roaring crowed.

Assemblymember Warren Furutani, who reminded the crowd that 50 years ago the California Master Plan for Higher Education was passed and one of the promises it established for the California education system was a free education, said the rally was going to be good but the fight wasn’t over.

“Brothers and sisters, the answer is not in this building,” Furutani said. “The answer is in your activism.”

Marks said he agreed with the overall message at the rally on continuing the efforts to make change and to continue with the movement.

“One of the things we will do is increase the contact with our representatives,” Marks said. “This is a movement and it is not just about March 4 or March 22.”

Sanchez, 22, said the fight for education would continue at CSUN and student involvement was crucial but to get students to participate a “grassroots effort” would have to take place.

“It’s easy to talk about it but to get them to come out, it’s all about interaction,” Sanchez said. “There’s really no successful formula.”