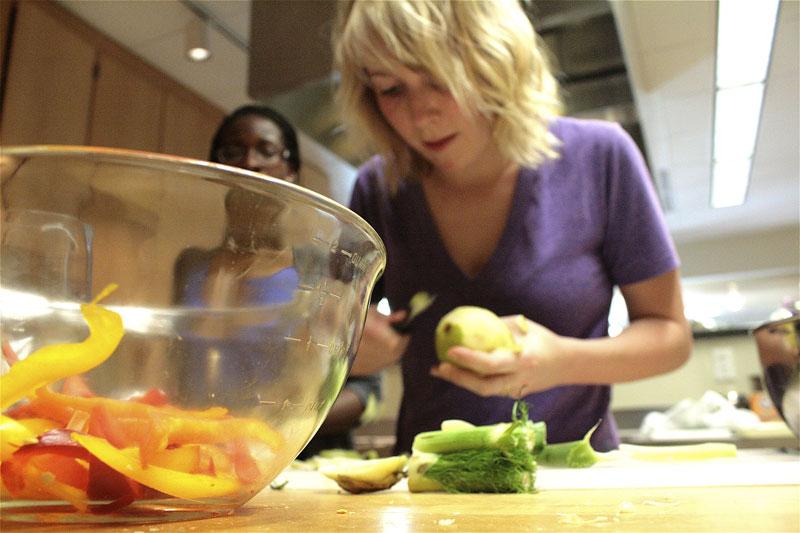 The 4th Annual Flores Family Iron Matador, is a cooking competition involving students from the Nutrition and Food Science Department, which allows them to use their expertise to create healthy and creative food choices. Stephanie Riley, 21, works on peeling pears for her teams dessert, poached pears.

Association (SDFSA) sponsored the fourth annual Flores Family Iron Matador, pitting four teams of three students against each other and the clock for the title of Iron Matador.

The winning team, the Kung Fu Pandas, submitted a Roasted Salad of mushrooms and asparagus with a lemon, caper, anchovy and brown butter dressing; a Thai curry steak tostada with endive salad as their entrée; and a strawberry floating island, strawberry soup with poached meringue topped with orange candied fennel, for dessert.

The teams were challenged by the secret ingredient, fennel, a bulb plant with an anis, or licorice, flavor.

Each team submits their recipes to the event board, which then buys the necessary ingredients, Lisagor said.

“Our use of the secret ingredient,” Pfrang said referring to what she thought put her team in the running to win.  “The candied fennel really did it.”

John Siritaranukul, senior nutrition and dietetics major and member of SDFSA, who invited two of his friends to join him in battle, brought the Kung Fu Pandas together.

“We had a lot of fun,” said Siritaranukul.

“It was fun working as a team and seeing the judges enjoy our food,” Arganosa said.

Coming in a close second place and receiving a joint edible basket and Starbucks gift certificate were the Flavor Chefs with a bruschetta appetizer, salmon with Guinness mustard entrée and filo cups with tart lemon filling for dessert.

The action in the kitchen was fed live to a projector in the back of the room where about 45 to 60 guests sat, ate and mingled throughout the competition.

“It exceeded my expectations,” said Jennifer Glockner, nutrition and dietetics grad student, event chair and publicity officer for SDFSA.  “The turnout was more than I expected.”

Each team was required to create an appetizer, entrée and dessert which were judged on a scale of one to 10, said Glockner.  The dishes were critiqued based on their appearance, plating, taste, texture, uniqueness, creativity with the secret ingredient and utilization of the theme, Glockner said.

Teams were judged by a five-person panel made up of Dr. Claudia Fajardo-Lira, associate professor at CSUN, Aaron Flores, registered dietician (RD) and founder of the event in 2006, Dr. Joyce-Ann Gilbert, RD, associate professor and director of the Marilyn Magaram Center, Dr. Allen Martin, undergraduate coordinator and associate professor in the Family and Consumer Sciences department, and Dr. Steven Witherly, CSUN lecturer and CEO of Technical Products, Inc.

The judges were not the only ones able to exercise their taste buds.  Guests were treated to student-made appetizers from the SDFSA cookbook including zucchini pineapple bread, fiesta black bean salad, Portobello bake, and couscous with corn and black beans; and able to sample teams’ leftovers.

“They’re part of the theme of sustainability,” Lisagor said.

This year’s overall event theme, “Nutrition from the Ground Up,” mimics that of American Dietetic Association’s (ADA) National Nutrition Month, a week-long nutrition education and information campaign created in March 1973 to emphasize the importance of informed food choices and eating habits, according to the ADA’s Web site.

Nutrition and Food Science Department’s mission of the event states that it serves to “encourage others to be more confident, creative and caring about their health and the types of food from which they can choose” and allow students to apply their knowledge of food.

“It’s a good experience,” said Amanda Salvestrini, nutrition and food science major and CSUN senior.  “It gives everyone the opportunity to be creative.”

The event was free but incorporated its first annual canned food drive, the proceeds of which went to SOVA, a local food pantry that serves more than 9,500 individuals every month, said Glockner.

With the verdict, and the dishes, served, in the words of Iron Chef: America’s Alton Brown, “We bid you good eating.”