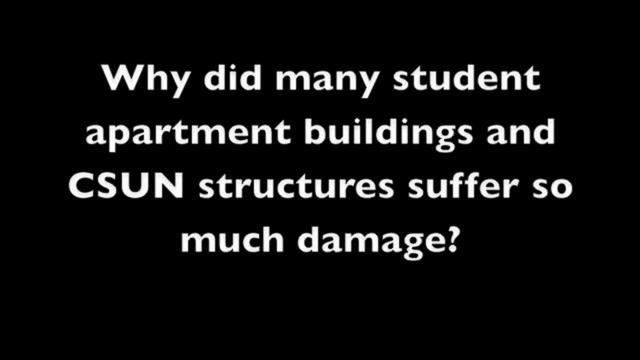 Times have changed since 1994, especially when it comes to CSUN’s earthquake preparedness.

Fifteen years ago, the 6.7 magnitude Northridge earthquake shook some buildings into unrecognizable mounds of rubble, including the CSUN campus.

But, CSUN is more prepared for emergencies like earthquakes because of stricter building codes and more awareness about what to do in the case of another emergency as strong or stronger than the Northridge earthquake.

“In general, steel-framed structure design has changed the most significantly since the 1994 Northridge earthquake,” said Colin Donahue, associate vice president of the facilities development and operations at CSUN.

“The seismic forces that we now design to are substantially higher than they were prior to 1994, and are a direct result of what was learned from the 1994 earthquake.”

Donahue also said there are other dangers after earthquakes that are just as much a concern as the quakes themselves.

“Fire is one of the biggest concerns after an earthquake. We had a fire in one of the science buildings that burned for over two days as a result of the earthquake.”

The buildings might be stronger, but that doesn’t mean students should neglect earthquake preparation for themselves.

Kit Espinosa, emergency management and preparedness coordinator for the CSUN Department of Police Services, said students should prepare their homes and their cars for any type of emergency.

Stocking up on food and water in both places are simple things that students can do that could make all the difference.

“Water, granola bars, at least something to give you some sort of sustenance for the next couple of days. Those kinds of basic things can make [students] very well prepared.”

Espinosa also recommended students take first-aid classes so they are able to help in an emergency when police, firefighters and EMT are overwhelmed.

“What people don’t understand is 95 percent of us are helped by each other, not by first responders.”