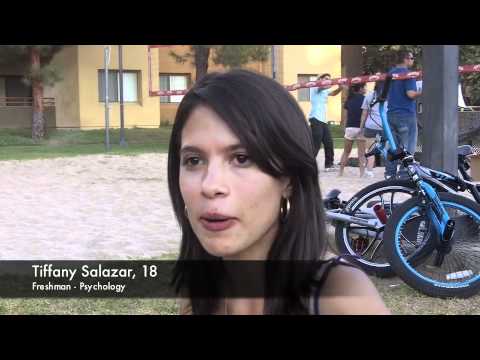 The USU collaborated with the Residence Hall Association (RHA), Associated Students’ Student Productions and Campus Entertainment (S.P.A.C.E.) and H.O.P.E., a bible group on campus to give a “Matador welcome” to students, said Jajrup Singh, event assistant for special events with the USU.

The USU provided students with a night filled with free In-N-Out burgers, digging through sand for prizes, a craft’s corner to create a small, personalized fish tank, disc jockey Malski, a performance by CSUN student band – Papafish – and using the theme of “Jeopardy,” with topics pertaining to CSUN’s events, calendar and sports, to allow three randomly selected students the chance to win an iPad.

Isioma Chima, 18, a second-year biology major, who lives in the dorms, said she attended the WAM Festival last year and really liked it.

“I feel like this year was more successful,” Chima said. “More people came this year and we all got a lot more free perks, like ice cream and soda, which we didn’t get last year.”

Janessa Kelly, a representative with the RHA said they love being a  part of anything that happens in housing.

“The main reason for participating is to see the residents happy,” Kelly said.

Something new at this year’s WAM Festival was the clubs and organizations tables, Singh said. Some of the services presented at the festival  included the Career Center, the Klotz Health Center, Matador Involvement Center (MIC), and various fraternities and sororities.

Towards the end of the night, USU ran out of free things to offer to the students.

“The students were everywhere and grabbing everything,” Johnson said. “But that’s what we wanted. We didn’t want to have anything left over. We wanted all the students to get a piece of something. That was the ultimate thing.”

Maritza Vaca, 18, a first-year sociology major who lives in the dorms, said she decided to come to meet other people.

“I really liked the environment and all the activities that the USU put on,” Vaca said.

There were people dancing to the D.J.’s mixes, visiting the different clubs and organizations, students playing games and the student band playing on stage, all at the same time, Johnson said.

Mallory Beason, 19, a second-year student majoring in English and living in the dorms said it is always nice to get out of the room.

“When I attended the festival last year, there was no band, so I was really excited to see a live band this year,” Beason said.

Dante Chocano, 24, bassist of Papafish and business marketing major said it was the band’s first time playing at the WAM Festival.

“It seems like the students really enjoy our music,” Chocano said.

The event, which ended with the iPad giveaway, was truly successful, Johnson said.

“We should just get together and party with the students and release some of that stress and get it going,” Johnson said. “This is just going to get bigger and better as the years go by.”