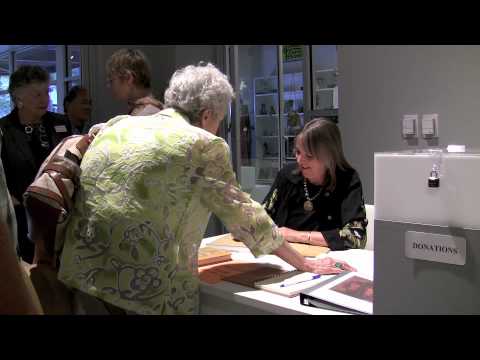 Valerie L. Winslow, artist and art professor, showcased her fascination with the human anatomy through paintings and sketches Friday with a narrated walk-through and book signing in the CSUN Art Gallery.

Although there were approximately 50 people in the gallery, the atmosphere was calm and a sense of inquisitiveness lingered in the room. Everyone was ready to learn about Winslow’s art and to hear her explain the meaning behind it.

Winslow describes her art as alliteration. She displays clear symbolism and messages in her pieces.

One of her pieces, a work entitled “The Last Straw” which was inspired by Leonardo da Vinci’s “The Last Supper,” often causes controversy, Winslow said. Winslow’s take on the painting, however, is that the 12 men surrounding the woman are not disciples, but depictions of the different roles of men in today’s society.

This piece creates plenty of conversation, but as with all of her work, she encourages everyone to reach their own interpretations of it and come to their own conclusions.

“I am enthusiastic about painting nudes,” Winslow said. “I like to study cadavers to make sure I am accurate with my work.”

“Winslow is a contemporary figurative artist whose work has been exhibited in museums and galleries nationwide since 1975,” said Wolffersdorff in a written statement. “Winslow is the first American woman to write and illustrate a book on artistic anatomy. Her in-depth knowledge of artistic anatomy, as well as her incredible ability to draw the human figure from memory, has made Winslow a popular and sought-after teacher.”

The exhibit featured many drawings from her book titled “Classic Human Anatomy: The Artist’s Guide to Form, Function and Movement,” as well as paintings and bas-relief pieces with the sketches that preceded them to illustrate how her work evolved.

Winslow was open to questions and comments throughout the entire event, and patrons were quick to oblige.

Michelle Gerders, one of Winslow’s students from 30 years ago, said she was influenced by Winslow then and continues to be influenced by her now.

Winslow also shared a dark moment in her life from which some of her art derived. After suffering from depression for a period of time, she used her passion for art to work through it. She also talked about how she is slightly dyslexic and how that finds its way into her art.

In many of her bas-relief assemblages, Winslow said she places people in different positions in small boxes to symbolize how she felt at the moment.

After guiding the audience through the gallery, Winslow allotted time for people to get their pictures taken with her, as well as to sign copies of her book.