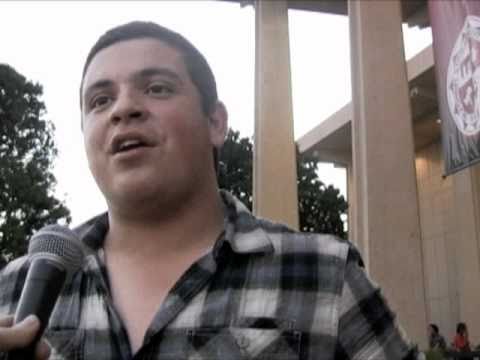 Student activists silently protested as CSUN freshman gathered at the steps of the Oviatt Library on Thursday, Sept. 2 for the 2010 Freshman Convocation.

Dressed in orange jumpsuits and white masks and carrying large signs, they marched onto the stage and through the crowds during the event.

Justin Marks, protester and member of the CSUN 6, in reference to the six people who were arrested and allegedly brutalized by campus police during the March 4 protests earlier this year said the group was there to raise awareness about budget cuts to education.

“We printed this flyer educating students, faculty, administration and community member about student fee hikes, where our money is going, how CSUN is affected directly and why our administration doesn’t share our burden,” said Marks, a senior at CSUN.

Freshman listened to words of advice and encouragement and to celebrate the beginning of their university careers.

The annual event aims to ceremoniously welcome freshman students to CSUN and motivate them to strive for academic excellence and personal growth as they pursue an undergraduate education.

“We’re having this convocation, on this lawn, in front of the Oviatt Library, so that you can all get a feel for this place because this is where we want you to participate in your graduation, your commencement ceremonies from Cal State Northridge in four years,” University President Jolene Koester said in her address to the students.

In addition to their studies, Koester said students should look for extracurricular opportunities and get involved in university life.

“Your classroom is only one part of your learning,” she said. “Be engaged in clubs, organizations, causes and work to make this a better community.”

Self-discovery through service to campus and community organizations was encouraged by many of the speakers at the convocation.

CSUN 2010 Outstanding Graduate June Kwon told students it was through her attendance at CSUN, and specifically a women’s studies class, that she found out what she wanted to do with the rest of her life.

“Before CSUN, I didn’t know what I loved, I didn’t think that college was meant for me,” Kwon said. “This all changed with one class and maybe it will for you too.”

After becoming involved in campus organizations and in the community, Kwon said she discovered her passion for human rights law and her desire to give a voice to those without one.

“How will you use you voice?” Kwon said. “Embrace your own unique path.  Set goals, but know that life is going to have obstacles and don’t let them get in the way.”

Many freshmen students said they could identify with Kwon.

“It was actually motivational because I wanted to get involved but I’ve never really had the initiative to do it, but it kind of just pushes me to just go out there and do something,” said 18-year-old Juliette Casillas, a freshman business law major.

Actress and philanthropist Holly Robinson Peete, the keynote speaker at the event, talked about her life and how it has led her to use her voice to raise awareness about autism spectrum disorder.

The recent runner-up on NBC’s “Celebrity Apprentice” is a mother of four and her son, Rodney Jr., was diagnosed with autism at the age of three.

“It’s a giant kick in the gut to get that diagnosis,” Peete said.

While on “Celebrity Apprentice,” Peete raised nearly $600,000 for the HollyRod Foundation, setting a record for the most money ever raised on the show.

“Our lives begin to end the day we become silent,” Peete said.

The topic of autism will have an increased presence on campus this school year.

The Freshman Common Reading for 2010-2011 explores the disorder through the eyes of a 15-year-old autistic boy in Mark Haddon’s book “The Curious Incident of the Dog in the Night-Time.”

University officials said the student protestors exemplified one of the important themes of the event.

Koester said, “I think it’s wonderful that our students use their voice as two of the speakers said.”