Matador Nights is a success 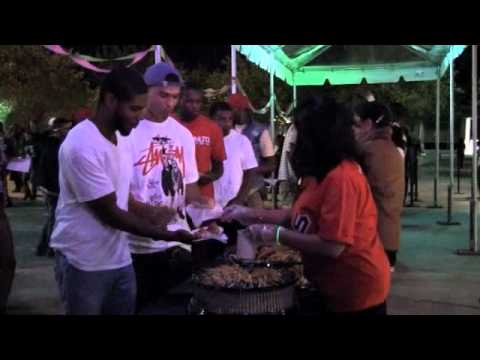 Rapper E-40 headlined the event, which included a variety of attractions including caricature artists, an airbrush tattoo booth, Tarot card readings, laser tag, carnival games and a variety of other activities.

“This was our most successful event,” said Hamid Jahangard, 27, USU event manager. “I was watching the amazing performance from the second floor. Rarely have I seen an audience so excited, know and sing all the lyrics during the performance. It just makes everything worth it, knowing that we have these events for the students.”

With all of the attractions, students could not wait to get in to the event, which started at 9 p.m.

Lines started about half an hour before the event, but stretched through a long maze of guardrails.

“We are expecting a lot of people, maybe 4,000 to 5,000 people,” said Jose Trujillo, 23, operations services assistant for the USU and recreation and tourism major. “We’ve had this event before, but every year it becomes a larger event than before.”

Christian Zelaya, 30, president of Empire Management Group in affiliation with Power 106 said this is their third Matador Nights at CSUN.

“We just aim for a good energy and a good time as we give back to community,” Zelaya said. “We want these students to go bananas.”

Zelaya added that 3,800 people were in attendance at last year’s Matador Nights and this year they wanted to come close to doubling that number, but aimed for 5,000.

The USU was  full with people enjoying the activities, dancing and waiting for E-40 to come to the stage.

The rapper did not hit the stage until a few minutes past midnight, but attendees found food and activities to pass the time.

The event also had food such as sliders, pizza, shrimp, snow cones, popcorn and many other snacks.

“My favorite was the chocolate covered strawberries,” said Stephanie Magana, 18, undeclared major. “After eating I just want to dance and get a tattoo.”

Balloons, colored lighting and signs helped guide attendees to the variety of attractions that were featured all around the USU.

Unlike last year’s Matador Nights, the carnival games did not have prizes for players to win, but that did not ruin the spirit at the game tents which included tic-tac-toe, launch the frog and a ball in a jug toss.

“I think there should have been prizes,” said Dexter Carranza, 19,  kinesiology major. “Students are coming to play and when they win they ask for a prize and all I can offer them is a high five.”

Carlotha Merino, 20,  health science major, said last year’s prizes  added excitement to the games but this year’s Matador Nights was better than the last regardless of the prizes.

“I think it’s more fun and the event has gotten even better,” Merino said. “The obstacle courses, E-40 and ‘mini-Six Flags’ (roller coaster simulation) added something new to the event.”

Many people started small dance circles that grew into larger crowds in anticipation for E-40’s performance.

DJ Rich Nguyen, 24, psychology major, was spinning at one of the dance floors where students got their groove on.

“We are playing different music in (the Grand Salon),” Nguyen said. “Just for some that don’t like hip hop as much.  Everyone looks like they are having a lot of fun.”

Attendees climbed  on lampposts and got  rowdy as they waited for the show to start, while DJ Just-N Credible spun on his ones and twos.

Security had to control the crowd by warning them that if they did not take at least two steps back, they would close down the show and the event.

After almost 45 minutes of waiting the crowd was greeted by E-40 and his entourage.

During the rapper’s set, E-40 constantly asked for the microphone and the music to be turned up. The audience agreed and insisted that the volume be turned up.

E-40’s set included his songs and collaborations like “Snap Yo Fingers,” “U and Dat,” “Tell Me When to Go,” “Muscle Cars” and many other tracks.

After the rapper finished, few attendees left the event but many stayed to dance and enjoy the music until the end of the night.

“This Matador Nights was bigger and better than last years,” said Daniel Rodriguez, 18, undecided major. “I’m glad I came earlier than I did last year. There was so much stuff to do. I had fun, hung out and met new people.”