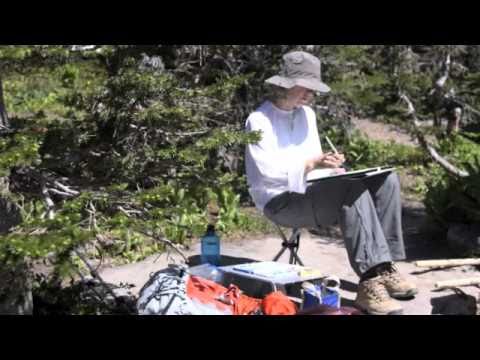 Joy von Wolffersdorff, artist and CSUN art professor, is determined to bring attention to the climate change crisis, a topic she is passionate about, through her art.

“I hope that when people view my art work they will spend a little longer thinking about climate change,” von Wolffersdorff said.

Von Wolffersdorff’s passion for keeping people aware of climate change comes from personal experience. After a vacation to Kauai she realized the severity of this world issue.

“When I was in Kauai, I went snorkeling for the first time and I thought I would see some beautiful coral, sea turtles and wonderful fish,” she said. “The fish were amazing and the sea turtles were like prehistoric creatures, and the coral was dead, it was heart breaking.”

The dead sea coral is caused by the rising temperature and sea level of the ocean, von Wolffersdorff said.

After this revelation she decided to come back and share her experience with some of her colleagues. She was shocked to hear their response to her concern, she said. Her colleagues didn’t believe in climate change, she said. From that point on, she made it a goal of her artwork to help make people aware of this growing dilemma.

She has done multiple art projects to express her position.

Her sabbatical project is a collection of paintings of glaciers from the Glacier National Park. The paintings display what is left of the glaciers after the last few years of climate change have worn them down.

One of her projects led people away from buying Kimberly-Clark products like Scott, Huggies, Viva, and others, she said.

According to von Wolffersdorff, Kimberly-Clark was stripping the boreal forest. She said  almost all of Kimberly-Clark’s products were made from the trees of the forest.

For the Kimberly-Clark project, von Wolffersdorff took the brand’s tissue boxes and made paper pulp out of them. She then placed the pulp into squeeze tubes and squeezed out the shape of the trees Kimberly-Clark products continually cut down. The piece spoke volumes to some of her students, she said.

Although much of her passion lies in her role as a self-proclaimed activist for climate change, von Wolffersdorff is also the head of the drawing department and an art professor in the Art and Design Department at CSUN.

“I balance my schedule by not watching television. I haven’t watched for about 10 or 11 years, and I don’t really like spending a lot of time at the computer. I’m pretty busy. I like to keep going all the time,” von Wolffersdorff said.

Von Wolffersdorff’s hope is to reach people through her work. She desires to keep her artwork out of galleries to make it accessible to the public.

“I want my work to be in the public where the common person can come by and see it,” von Wolffersdorff said.