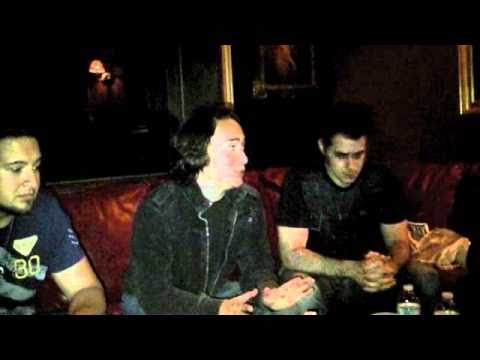 With the release of their new album, Intercept seems to have a message for their fans: expect the unexpected.

For those who have become familiar with the Los Angeles-based band’s previous work, their latest and third album, “Symphony for Somebody Else,” will come as a musical left-hook. The album is a self-proclaimed “rock album” which doesn’t exactly follow the trend of their preceding mellow and ballad-filled work.

That being said, the new musical direction the band has taken is an undeniably catchy change, one that will translate well to live performances.

“We were on tour for (our second album) Magnolia Road, but we found ourselves playing more of this new unrecorded material, just because it was more fun to play and more energetic,” said lead guitarist Jeff Knudsen.

After wrapping up their last tour, which took them all the way to Louisiana, the group knew they wanted to try a new direction that would allow for more energy.  With Erik Ron as their new producer, Intercept did some experimenting.

“It was a good long process, but Erik really came in and shifted things where they needed to be,” Phil said.

The album opens with “Made to Fall,” a momentum-fueled kick full of soaring riffs and strong vocals, which sets the mood for the songs to come.  The fast-paced rhythms and melodies are almost a challenge to the listener but it will make you move your feet.

The lyrics were co-written by Christian and Erik and they intentionally avoided the overkill of any subject.  With no prominent theme that lyrically ties the songs together, Christian simply wanted to produce feel-good music.

While it is generally an upbeat album, Symphony is peppered with slower ballads that revisit the sounds that Intercept has become known for.  Tracks such as “Love is Like That” offer soothing breaks among the unrelenting energy of the rest of the CD.

Since the band formed roughly five years ago, they have been busy establishing a name for themselves and learning to reinvent their sound.  For a group that started out with a largely acoustic sound, they have come a long way from where they began.

Ask them about their professional goals for the future and you’ll get an honest and straightforward answer. Intercept wants what every artist wants.

“You just want an audience,” said Christian.  “You just want to make music that people are going to listen to.  When you’re starting out, that’s very hard, to get people to care about it, but we’ve come a long way in five years.”

With an upcoming tour for the latest album, they’re sure to go even further, perhaps with a slightly different crowd than before.  While performing “Rest of My Days,” their first single off this record, Jeff was surprised to see that a group of fans started a mosh-pit.

Even if the album is a success, don’t get too comfortable with their sound.  The band said they may not be done evolving yet.

“Until we have a $2 million dollar deal on the line telling us what music to write, we’re just going to keep doing what we feel like doing,” Jeff said.