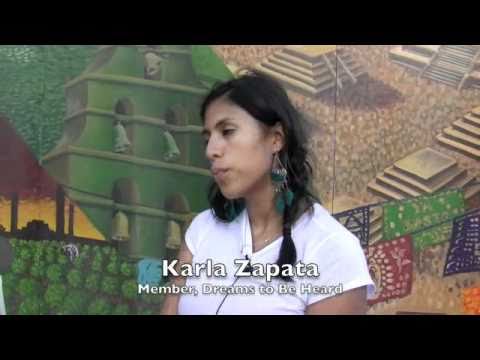 Political issues were close to the surface at the annual Endependence Day event in the Chicano House.

The event, which was hosted by MEChA had performances by Danza Mexica Cuauhtemoc, followed by Ballet Folklorico Aztlan de CSUN and the CSUN Mexican Music Ensemble club on Friday night.

Various vendors tabled at the event, selling items such as handmade jewelry, books and clothing.

Among the food items sold were tostadas, tacos, enchiladas and tamales.

Proceeds from booths went to causes such as La Raza Youth Conference and scholarships for undocumented students.

In conjunction with the idea of independence, MEChA helps tend a food garden behind the Chicano House.

“We’re also endorsing self-sustainability (and) not having to depend on systems,” Porras said.

There were about 100 people in attendance, said Gomez, and Chicano/a studies major and Spanish minor.

Some attendees saw the event as a way to experience camaraderie.

Marvin Villanueva, Educational Opportunity Program (EOP) academic adviser, said the event allows him to connect with students at a different level, but also to connect with his culture.

Junior Jennifer Veliz, 20, a double major in psychology and women’s studies, said she enjoyed  the unity of people.

Also invited to the event was Lalo Alcaraz, a syndicated political cartoonist whose daily comic strip “La Cucaracha” runs in newspapers across the nation.

“We can see how Mexico is independent of other countries, but right now it’s not independent of the economic problems and the narco-war and things like that, which makes it dependent on the global community and on its neighbor, the U.S.,” Alcaraz said.

His table featured enlarged versions of his editorial cartoons.

Senior Karla Zapata, 24, member of Dreams to be Heard, a group of 25 to 30 undocumented students said students like her do not receive any financial aid and cannot get a driver’s license even though most of them pay taxes and have jobs.

“It’s very hard for us to pay for school,” said Zapata, senior double major in Central American studies and history. “I personally have to work two to three jobs sometimes.”

The Development, Relief and Education of Alien Minors Act, better known as the DREAM Act was first introduced in 2001 and will come before the Senate on Thursday. The DREAM Act was added to a defense policy bill by Senate Majority Leader Harry Reid, along with the repeal of the “don’t ask, don’t tell” military policy.

“We’ve proven that we work hard, some of us have graduated college and are now in grad school and still cannot exercise our degree,” Zapata said.

“I think it’s a stupidity in this country that you have people who come here when they’re three years old, they get educated, then they go on and do very well in high school and then they can’t go to college,” Acuña said. “They work in jobs that are marginal. Some of these people could be engineers.”

Anthony Ratcliff, Pan African studies professor, took the stage during the event and addressed the March 4 student walkout, the arrests of the ‘CSUN 6,’ the Arizona immigration law and the recent officer-involved shooting in Westlake.

“The ‘CSUN 6’ is made up of African-American and Latino students and I think that’s a very important thing to happen,” Ratcliff said.  “So for us, it’s the idea that through struggle you can really start to make unity.”

It is also important for CSUN students to take Chicano/a studies and Pan African classes to demonstrate their relevance, Ratcliff said.

“Keep the struggle going,” he said. “If you don’t know your past, you’re doomed to repeat it.”