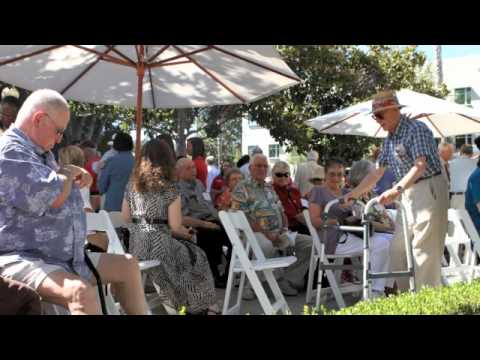 Many alumni returned for CSUN’s third annual Founders Day during a fall heat wave that failed to stop about 500 people from taking part in the festivities.

The event started off with mingling on the University Lawn, where pictures were displayed and guests could purchase selected San Fernando Valley State College merchandise.

Water and lemonade were passed around to combat the early morning heat.

Vance Peterson, vice president of University Advancement, welcomed a crowd that was seated and standing around the new Sundial fountain outside Bayramian Hall.

The fountain was dedicated in honor of the university’s first president, Ralph Prator.

Prator’s personality was like a fountain so it’s only fitting that we honor him with a fountain, Peterson said in his speech.

Jolene Koester did the honors of cutting the ribbon after giving a short speech about the former president. She said that in the few times she met Prator when she first became president, he had imparted wisdom and guidance.

“He also told me to exercise every day,” Koester said in her speech.

She spoke of his hard work for the university, including how he successfully grew the campus from 70 acres to 350 acres.

“I believe we have a first-class institution of learning in the San Fernando Valley because of his efforts,” Koester said.

After the fountain dedication, guests were directed to a large tent set up for a lunch of grilled chicken, salad, and rolls served on bamboo plates, as well as dessert and plenty of iced tea and water.

Alumnus Kevin Roderick, class of ?83, was the event’s keynote speaker.

He spoke about the San Fernando Valley’s history.

“Growing up in Northridge turned me into a history junky,” Roderick said.

He also spoke about his favorite areas in Northridge growing up, including what was formerly Devonshire Downs on Zelzah Avenue and Devonshire Street, which he said the university ended up purchasing.

“Who can I talk to about that?” Roderick said.

He sometimes visits a patch of eucalyptus trees just for his own comfort because he said the only constant in the valley is change, and he likes to remember the history.

“The history in the Valley is what you make of it,” Roderick said.

Former students said they loved catching up with old friends at the event.

“It’s been amazing to see all the faculty and old friends, said Shari Rubin, class of ?91. It makes me want to be more involved with the university.”

Those who help with the alumni association, the main sponsor of the event, enjoyed finally matching faces to the names, said Geetna Thomas, who is in charge of the alumni database.

Many alumni commented about how the campus has changed over the years.

“When I first was going here they said someday this school would be bigger than UCLA and I said, ‘No way,’ but it has grown,” said Diane Goldstein, class of ?63.

Goldstein said there were not many places to eat back then, but they did have the “Bullpit,” a gathering place that had a few tables.

Alumnus Janice Quint, mentioned how much the dorms have changed. She was a student in 1959 and even though she lived in Sherman Oaks, she wanted a dorm.

She lived in an all-female dorm called Monterey Hall.

She said they had a housemother and curfew, with a single phone on each floor. There were no boys allowed, except in the lobby.

She and some other girls also put their names in wet cement at the dorm, but she said it was no longer there when she came back after the earthquake.