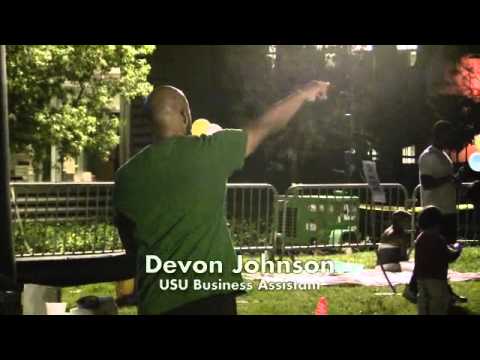 Children and parents from the CSUN community were treated to a fun mini-carnival Friday night at Family Fun Zone.

The event, which was hosted by the University Student Union (USU), brought families from the campus together by creating a free event for children to enjoy.

Event planner Amari Canada, 23, said the purpose of the event was to reach out to the community while giving families a fun place to hang out.

The small festival took place on the OST lawn behind the Sol Center, where an estimated 200 people filtered into the function throughout the course of the night.

A DJ played kid-friendly tunes as parents socialized with colleagues and children enjoyed the variety of crafts and games available to them.

Children also enjoyed a bounce house, face painting, and a Nintendo Wii on a giant monitor.

Blankets and chairs were set up for the families, and parents were able to rest while the children played games.

This is the second time the Family Fun Zone event was hosted. The first took place last semester in conjuncture with Matador Nights. The event was so successful that organizers decided it could stand on its own.

Canada, journalism major, was in charge of ordering food, contacting vendors, and creating the general atmosphere of the night.

Canada worked alongside H.O.P.E. Fellowship, a local church in the area, for event funding.

The junior said she was grateful to collaborate with the Family Fun Zone committee, the Residence Hall Association and staff.

A majority of those who were overseeing the food and craft stations included student volunteers and USU staff.

For many students, it was their first time at the event.

Volunteers from the Residence Hall Association passed out pizza, popcorn and snow cones to  the happy children.

Participants sang while painting faces, and students laughed as kids played with a giant checkers board.

“The family demographic kind of gets ignored here, so we’re trying to include them through this,” Powell said.  “This is kind of a ‘Children’s Matador Nights!’”

Johnson said his role at the Family Fun Zone was “jack of all trades.”

Behind the scenes, Johnson said he contributed to the financial side of the event by acting as the business assistant.

“It’s pretty awesome to see students and faculty in a different light,” Johnson said.  “It’s about being a part of the community.”

Susy Karraa, a CSUN graduate with a bachelor’s degree in psychology, attended the event with her two children.

Karraa said this was her second time coming to the event, and added it would not be her last.

“We love being able to mingle and see familiar faces,” Karraa said. “We’re so busy with our daily lives, it’s nice to just have fun.”