Authentic Kosher dishes to please all 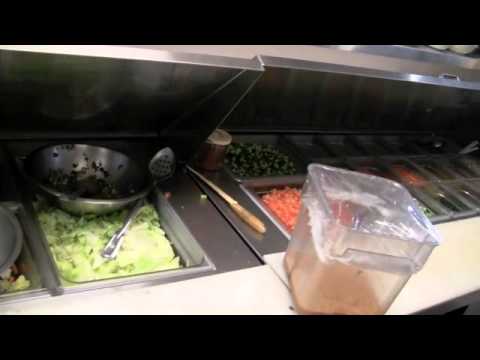 Nestled between the small shops on Ventura Boulevard is a blink-and-you-miss-it treasure called Kosher Chicks, whose simple yet authentic dishes are a welcome treat to all food aficianados.

This small family business caters to not one, but two niche markets: the Kosher crowd as well as the all-natural crowd. They pride themselves on the fresh-cut fries, which are never frozen, and bank on the fact that closing for Jewish holidays will keep the clientele they’ve built their business on.

Owned by Sol Shaolian, Kosher Chicks can also satisfy a variety of cravings one may have, serving Middle Eastern, Mediterranean, Asian and American flavors that are sure to please even the pickiest of eaters. Although they specialize in dishes such as shwarma and kabobs, there are hamburgers and hot dogs available for those I like to call, “Food Wimps.”

Walking in, the customer is greeted with a casual and clean atmosphere, thanks to the subtle yellow walls and the big brown booths that line the wall. Large and vibrant photos of food hang on the walls, and will make you consider photographing your own meal and making it art.

Customers filter in and out of the restaurant, while music from The Shins and Ryan Adams plays in the background. The restaurant feels modern, yet warm and welcoming. It is the ideal stop for a laid-back lunch or dinner at a price you wouldn’t expect.

The menu offers an array of mouthwatering dishes, all prepared with fresh and natural ingredients. It’s clear that this restaurant does not take shortcuts in their preparation. The small team of chefs works diligently to create authentic dishes. No job is too menial. They even squeeze their own lemon and lime juice daily.

Taking a short tour through the establishment, their commitment to the customer is evident. Everything in the kitchen is Kosher-certified, as is the extra sink outside of the restroom.
The small kitchen, where four chefs prepare the food, includes a large rotisserie oven that cooks multiple chickens at a time. There is also a large ingredients bar where many of the
dishes are seasoned with fresh cilantro, tomatoes or cucumbers.

While there, I tried a first dish with garlic French fries. Anything smothered in garlic is the meal for me. Its simplicity was brilliant. Made from fresh potatoes and tossed with some diced garlic, parsley and sea salt, the French fires didn’t leave me with an awful feeling that their oil content was going to lead to a quick heart attack.

After, came the hummus and pita bread, garnished with olives and herbs. Anyone who thinks store-bought hummus is as good as it gets, doesn’t know what they’re missing until they try the freshly made dip at Kosher Chicks. I would have made that my entire meal if I hadn’t ordered other dishes already.

Next was the Israeli salad, which was a light mix of tomatoes, cucumbers, and parsley in olive oil and lemon juice. It tasted light, crisp and acted as the perfect palette cleanser, paving the way for my entrée.

For the main dish, I ordered the falafel wrap. The perfectly seasoned falafel was wrapped in an airy lavash bread spread with the restaurant’s own hummus. It included mixed lettuce, tomatoes and a cilantro-lime dressing. It was filling, without being heavy, flavorful, without being overwhelming, and absolutely delicious.

The portions are big, meaning if you can stop yourself from inhaling it all in one sitting, you’ll probably have a little left over to make another satisfying meal. Even after my abnormally large lunch, I didn’t feel sluggish, and avoided the need to unbutton my pants from overeating.

Whether it was the natural ingredients, or just a case of mind over matter, I left the restaurant feeling strangely healthy. Maybe Kosher Chicks is on to something with this whole “natural foods thing.” I may have to go back for a second delectable meal, just to be sure.