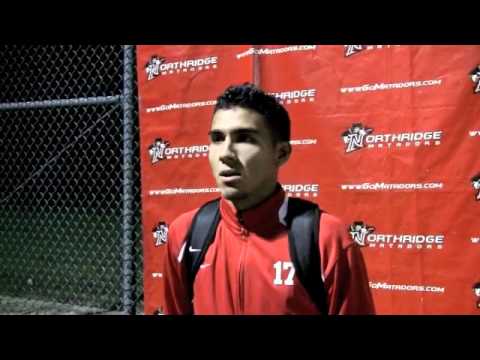 The first Matador goal of the season at home under the lights was not enough to overcome a two-goal deficit in the first half as CSUN was unable to attain a season sweep of the Titans, losing 3-1 in a Big West match on Wednesday night.

Forward Camilo Rojas scored the lone goal for the Matadors in the 63rd minute of play. After receiving a pass from midfielder Rafael Garcia in the box, Rojas blasted a shot pass the keeper toward the left post.

The Matadors edge the Titans in shots 21-18 and corner kicks 9-3, however, they were unable to capitalize on ample scoring opportunities.

Midfielder Gustavo Villalobos and midfielder Rene Anguiano had a combined 11 shots with three shots on goal.

With the loss, the Matadors failed to pick up any points in the Big West standings and remained with four. Fullerton received three points with the win and has a total of nine points.

The Titans gave the Matadors a headache in the first half as both goals for Fullerton came off set pieces resulting in goals off headers.

The first score of the match came in the 23rd minute after defender Jesse Escalante scored his second goal of season for the Titans. Escalante headed in a pass of a free kick from midfielder Oscar Aguero.

The best scoring opportunity for the Matadors in the first half came off the foot of forward Camilo Rojas in the 31st minute of the game. Rojas received a lead pass from forward Mattias Bonvehi, which resulted in a one-on-one matchup with the Titan goalkeeper Trevor Whiddon.

The shot that sailed wide right could have been the equalizer with the Matadors only being down one goal at the time.

The second goal of the match came in the 34th minute off the head of the Titan’s scoring leader Nick Poshtuma. The goal came in an unconventional way as defender Jonathan Birt threw the ball into the middle of the goal box. Among all the bodies and chaos Poshtuma arose to head the ball in to the center of the net.

Rene Anguiano had an opportunity in the 9th minute of the second half to score the first goal for the Matadors with two consecutive shots, which were saved by Whiddon including one at point blank range.

The final goal of the game for the Titans came off a counter attack in the 83rd minute from midfielder Antonio Vernaschi, who had a one-on-one matchup with goalie Michael Abalos and placed a low shot towards the right post.

Now the Matadors shift their attention to a road matchup against the Aggies on Saturday.

CSUN will try to split the season series after losing to the Aggies, 1-0, in its Big West home opener Oct. 9.