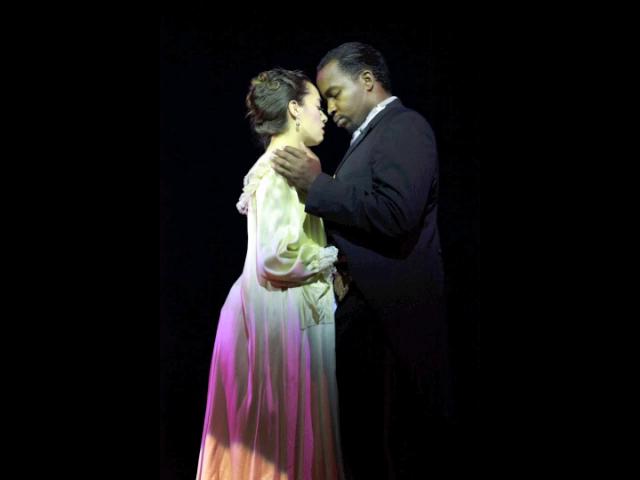 As a teenager in San Francisco, when Maria Elena Altany’s parents would go out for the night, she threw a party like no other kid her age was having.

But, she wasn’t blasting Beyonce or Christina Aguilera from the speakers like the other girls her age.  Those pop stars couldn’t riff anything like the iconic singers Altany was obsessedwith, like renowned coloratura soprano Joan Sutherland.

“I would just lay on the floor and listen to her sing this music seven times in a row,” said Altany, describing an aria sung by Sutherland from Verdi’s opera “La Traviata.” “It had lots of crazy runs, Joan Sutherland was the queen of those…I thought it was the most beautiful thing I’d ever heard.”

Now, with an undergraduate degree in music from Loyola University New Orleans, Altany, 23, is a coloratura soprano in her own right and starring as Elizabeth “Baby” Doe Tabor in “The Ballad of Baby Doe” opening this weekend at the CSUN Campus Theatre in Nordhoff Hall.

“This is one of the biggest roles for my voice type and it’s something that I always dreamed of doing but I never thought I’d have the chance to do it. It’s not really done very often at all,” said Altany, who is in the second year of her master’s degree in music at CSUN. “It’s really expensive. There’s a big chorus and the music’s not that easy.”

Altany’s gratitude and giddiness about the up-coming show is evidenced by the enormous amounts of preparation she has put into the role of historical figure Baby Doe, a beautiful divorcee whose scandalous affair and subsequent marriage to Horace Tabor, one of the wealthiest silver prospectors in Colorado, in the early1880s has made her one of the most famed adulteresses of the American frontier.

“When they announced the auditions in April…I already had a recording of the opera so I was playing it in my car.  I almost had the whole show memorized before the audition,” Altany said.

After getting the part, which she alternates nightly with Yunhui “Harmony” Ji, also a graduate student in music, Altany continued to learn the role over the course of the summer while working temp jobs in San Francisco.

At the urging of the show’s director, Zeffin Quinn Hollis, she watched all three seasons of HBO’s “Deadwood” to get a strong sense of the time period.  She also dug up all the information she could about the life of Baby Doe, who according to the most recent research has been historically mischaracterized as nothing more than a gold digger.

Altany said that although she can’t re-write history, she hopes to vindicate Baby Doe even a little if she can infuse the true life love story between Tabor and Baby Doe with a sense of authenticity.

“She was so alone for most of her life and so misunderstood and so maligned really, and he was the love of her life.  I can’t fathom how difficult it must be to let go of the one person who loves you in a world that hates you…The world loved to despise her as a wanton woman.”

Colors of a Soprano – Maria Elena Altany from Mandi Lynn Gosling on Vimeo.