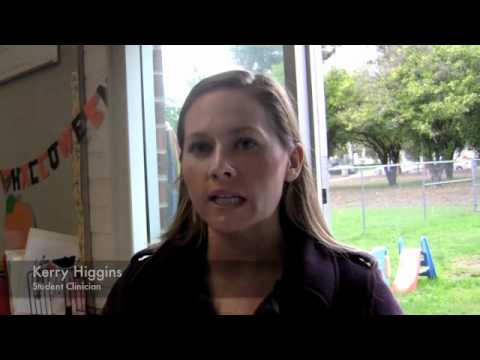 Tucked away in a brick building near the Orange Grove, a group of toddlers sit in a circle and begin the day by singing songs.

They are part of the CSUNFlowers preschool program, which is run by CSUN’s Speech, Language, and Hearing Center. They meet Tuesdays and Thursdays from 9:30 a.m. to 11 a.m in Monterey Hall.

The program is language based and is geared toward children between the ages of 18 months and 4 years.

“It’s great support for the parents whose child is the same age that they can relate to,” said Diane Carr, child development specialist.

She added that watching families connect is her favorite part of the program.

Bernadette Clark of Simi Valley participates in the program with her two grandchildren.

Clark and the children’s mother were referred to the CSUNFlowers program by the regional center.

“He doesn’t converse that much yet,” Clark said of 2 and a half year old, Evan. “It’s painful to watch when he can’t grasp the words.”

She said he benefits from the preschool program because it involves speech, hearing, and repeating words back during activities.

“You can’t rely on people to do all the work,” she said, adding that families must also work with children at home on their language skills.

Senior Valerie Haraga, kinesiology major, said she began the program with her son, Henry Gonzalez, when he was 18 months old.

Haraga said she likes the program because it is structured and it prepares her son for preschool.

Advanced undergraduate and graduate students majoring in communication disorders at CSUN also work with the children.

“Each child has their own specific speech goals which we follow,” said Kerry Higgins, senior communication disorders major and a student clinician in the program.

“Throughout the program we try to stick to those goals, but a lot of it is getting them immersed into language,” Higgins said.

The clinic is run more as a preschool since the children do not have diagnoses, she said.

The curriculum also involves motor play and activities such as coloring and painting.

Matthew d’Alessio, CSUN faculty member, said he has participated in the program since it began in January.

“It’s very different from our home,” said d’Alessio, who teaches geological sciences. “Here they have a very structured program and at home we kinda just play and do fun things.”

His son Jonah, 2, has also benefited from the program’s language focus.

“Our son was just about ready to learn language and he didn’t speak very much, but he was really interested in words so they took advantage of that and directed him in the right way,” he said.

He said his son talks about his friends at the program and what he did during the day.

The program was made to fit a need in the community, said Connie Stratton, clinical supervisor for the program.

“We discovered that there was not a program for ‘mommy and me’ for the children who were after age three,” she said.

The team then put together a program for preschool children that also included the family, Stratton said.

“We believe that children learn best with their families and that families want to enjoy their children as they’re going through their early developmental stages,” she said.

The program is $540 per semester, but students and faculty are eligible for a discount. They accept applicants on a continuous basis, and the price is reduced if a child joins in the middle of a semester.

The CSUNFlowers program gives children a boost when they go on to other preschool programs, Stratton said.

Stratton said her goal is to change what some call the “terrible twos” into the “terrific twos.”