CSUN community comes together to ‘Take Back the Night’ 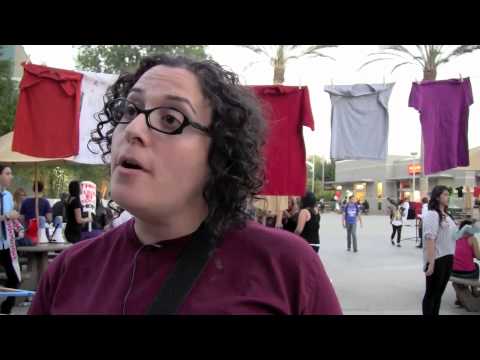 Women and men gathered Thursday night to discuss resources for rape and abuse survivors and share their experiences at the 8th annual Take Back The Night march.

“We are here to publically say that we’re against the abuse of women, we won’t take it anymore, and we are taking back the night,” said Shira Brown, an organizer of the event and professor of gender women’s studies at CSUN.

Brown said she was most excited for the students to see all the resources that are available to them.

The night began with a resource fair, with booths from several of the event sponsors, some of which are Women’s Research and Resource Center, Gender and Women’s Studies Student Association and the Gender and Women’s Studied Department. Local punk rock band the Neonates performed. Attendees were encouraged to paint signs they could later carry during a group march to the women’s research and resource center.  Two males painted the slogans, “Beat off, not women,” and “I don’t hit.”

About 100 shirts hung on a clothesline surrounding the Plaza del Sol with phrases such as “Men must change” and “I said no, I said stop, he didn’t” painted on them, to show what the event was about to those passing by.

Faculty members spoke after the Neonates concluded their performance.  Dr. Harry Hellenbrand, provost and vice president for academic affairs, said Take Back the Night was about a worthy cause.  Elizabeth Say, dean of humanities, recalled walks at nights with the women’s research and resource center, in which they identified places on campus that may not be safe.

“Since I can remember, the women’s center has been making this campus safer,” Say said.

Mark Stevens, from university counseling services, talked about the benefit of the march and how the university’s counselors can help people deal with trauma.

“This is an event that adds to the mental health of our community,” Stevens said. “Holding onto these traumatic events can be poison to the soul.”

Daniel Foster, crime prevention coordinator at CSUN’s department of police services, discussed the nuances of reporting a crime. If a victim does not want to report a crime they could file a report that will only be investigated if they choose to seek charges against the assailant at a later date or they could make a report anonymously, to help the accuracy of police statistics he said.

Students representing the Vagina Monologues and Project Date spoke as well. They were followed by a spoken-word performance by D’Lo.

Professor Randy Picarelli discussed the daily routines women must endure that men do not, such as getting errands done before it is dark outside, staying indoors at night and never looking down as she speed walks to her car. Picarelli said 70 percent of assaults against women take place between the hours of 6 p.m. and 6 a.m.

After the speeches concluded, attendees lit candles and held a moment of silence for survivors of abuse before marching loudly to the women’s research and resource center.

“The silence is deafening so lets make some noise,” Brown yelled to announce the beginning of the march.

Claudia Menjivar, a senior double majoring in psychology and child development, and survivor of abuse said the public needs to be more aware of abuse.

“It is a taboo subject, even amongst friends,” she said.

Once at the women’s research and resource center, over 100 people listened to personal accounts of abuse from survivors, friends, and family of victims of abuse. The audience applauded and shouted words of support, encouragement and love when speakers cried as they shared personal stories.