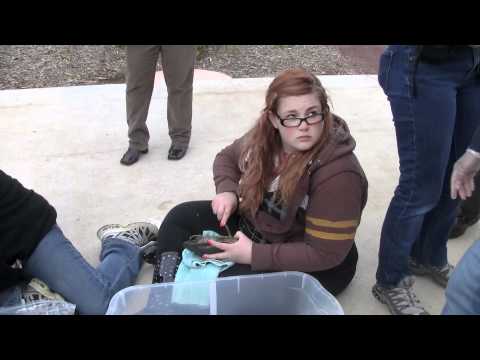 In the middle of the orange grove, there is a pond. In that pond there is a population of red-eared slider-turtles.

Biology 512, taught by Robert Espinoza, is a class on herptology, or the study of reptiles and amphibians. The class went out to capture, measure, tag, mark, log, and release the animals on Thursday.

“We want to get as many (as we can) if not all the turtles today, so that we can actually compare data, and do a half-year census, or yearly census,” said behavioral ecology graduate assistant Nicolas Gutierrez.

The logs will be kept and the turtles will be visited again every year by a herptology class. Future students will catch turtles are in the pond and compare them to the data collected Thursday. They will then analyze the population growth of the animals and see if it is steady population, or if new turtles are being born or left there.

These turtles are not a native species. The population was established when people began to leave pet turtles at the local pond when they were no longer wanted.

The students had to get into the pond to catch the turtles.  They donned wetsuits, wielded nets and brought buckets full of turtles back to shore for identification. One turtle they caught was melanistic (a mutation making it darker) and one was of a completely different species, called a painted turtle.

“The students are getting first hand (experience), with first-rate people, and it’s a lot of fun,” said Mark Oliva, 25-year-old ecology graduate student.

Under the supervision of their professor, the students weighed, measured, and identified the genders of the turtles. They then logged the data and inserted a numbered tag in front of their back legs. After, they filed a notch in the bottom of the turtle’s shell on the side that they tagged to mark which turtles they were finished with.

“And at the end we release all the turtles so that they’re able to do what turtles do until we come back next year and do it all again,” Espinoza said.