Dealing with rude roommates in the dorms 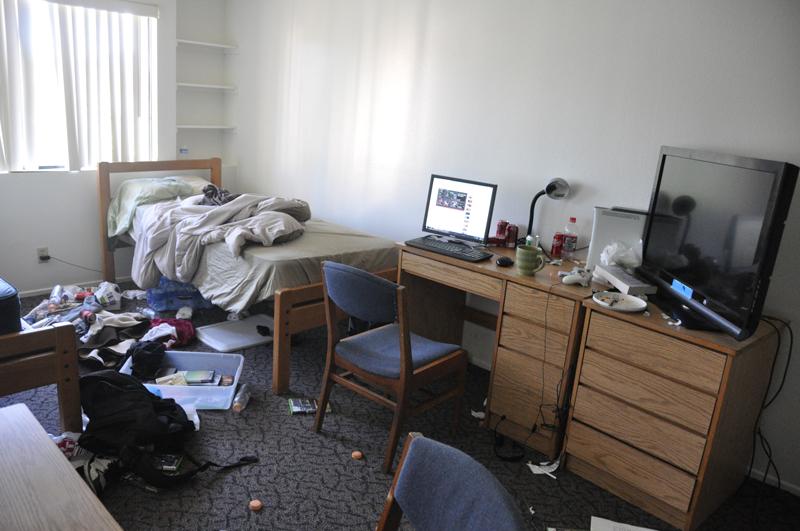 Making a list of responsibilities for each roommate can help avoid having messy rooms and bad relationships with roommates. Photo Illustration by Ernesto Gonzalez

Living at the dorms or sharing an apartment with others can be a great experience, but no one is perfect and dealing with the imperfections of others and recognizing your own can help make living with others and life much more bearable.

“Communication and trust are very important,” said Leah Oaks, 19, art major.  “Without those, life can get really stressful.”

Psychology major  Nydia Torres, 25, agrees saying that talking with your roommates is the best way to avoid conflicts.

“You need to make a list of things with your roommates,” said Torres “If you are the type of person that likes to keep the kitchen very clean, let your roommates know.  If you like to sleep early, tell your roommate your sleeping habits.  If you are uncomfortable with having your roommate have people sleep over, tell them.”

Torres also advices to not move in with friends you already know.

“It is okay for them to live next door, but unless you have lived with them before, it can ruin friendships,” said Torres.

Being respect of others regardless of your own views is something to prctice.  Erika Bernard, 19, sociology major, had a roommate who was very open about her sexuality and enjoyed walking around naked in the dorm.

“I was very uncomfortable around her,” said Bernard.  “She had no problem having her privates exposed.  I had to tell her that she can be naked in her room, but not around the entire dorm.”

Being aware of how your habits effect your roommates is also important.  Noise can be a big issue.  While some people enjoy playing music or watching TV on full volume, others need some quiet time.  The walls in the dorms are not very thick.

Some students deal with this by going to the library to study.  Alex Ng, 19, mechanical engineer major, suggests buying ear plugs.

“I snore really loud at night, so I bought my roommate ear plugs,” said Ng

Of course there are times when people become more than unbearable and some students just have to get out.

Torres almost had her car taken by her roommate.

“She was from out of state and had her own car at first,” said Torres.  “But after her fifth accident, she had to rely on me to get her to places.  Whenever I would go out to Target she would come along and get the things that she needs.  But I tend to buy things in bulk and did not need to go all the time.  Well she told me ‘Next time you go to Target let me know.’ After some time she comes up and yells at me for not taking her.  I understood that if I was going to go, I would take her as well, but I had no need to go to Target.  What she really was saying was that she needed to go buy things, but she did not tell me directly.  She would also demand to go to places like Hollywood like I was her chauffeur.  She almost snatched my keys, but I had to make her understand that I was not her driver and couldn’t afford to take her wherever she wanted.”

When it feels like things are just not going to work out, students can go to Building six and see if they can transfer to another room

For Daniella Baquing, 22, political science major, she could not last for more than a few weeks with her roommate.

“I had my stuff stolen by my roommate,” said Baquring.  “They took my food and even took my pillow. I had to transfer out.”

Being respectful of your habits and having communicating well with your roommates can prevent many of these issues and prevent the need to transfer rooms.