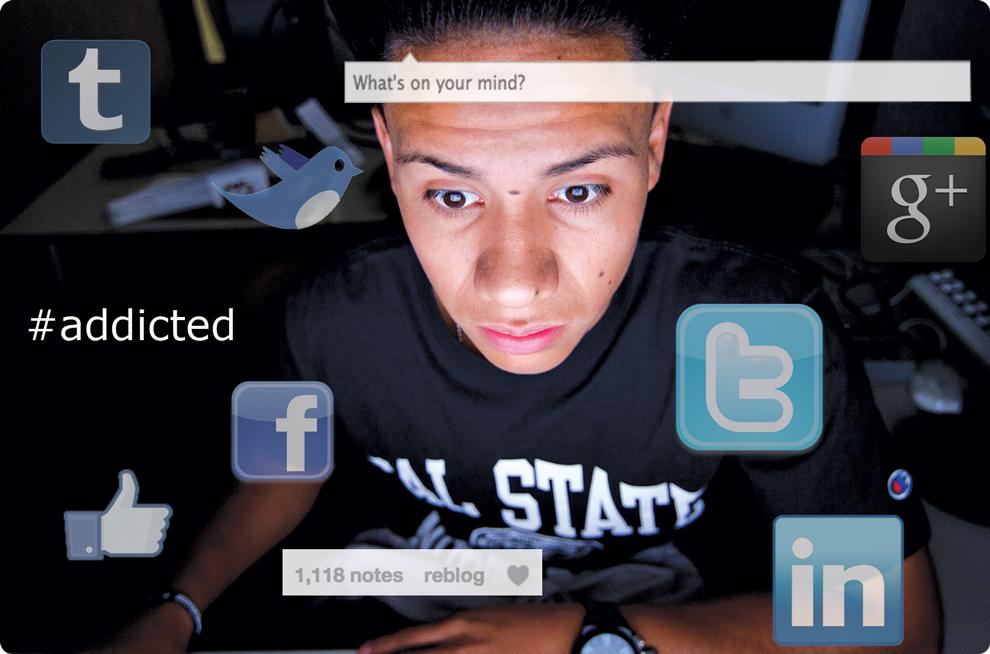 Ekin Eser does his best to avoid logging onto his Facebook account but often finds himself typing the web address into his browser without realizing it.

“I know it is a bad thing to go on Facebook a lot,” said Eser, a pre-finance major. “I have to use an extension on my browser to prevent me from going onto Facebook.”

For Eser and many others, Facebook and other social networking websites are a way of relieving stress.

“It’s nice to see words of encouragement from my friends,” said Christopher Alvarado, a finance major. Reactions to posts are what help him relax when he is stressed with homework, he added.

But there comes a point when logging onto these websites change from being about socializing with friends, family and acquaintances and develop into a more serious problem, such as addiction.

Research done by a CSUN psychology professor, Dr. Delinah Hurwitz, suggests that people overuse Facebook, Twitter, and other social networking websites because of an addiction to endorphins released in the body during the process of posting.

People become hooked to this process because endorphins, a chemical produced by the body that acts as a sedative, rushes through that person’s brain and body every time someone responds to their post, Hurwitz said.

The symptoms are almost the same when comparing heavy social networking users to drug addicts. The mutual goal is to release stress.

For drug addicts, a “high” could be taking methamphetamine or heroin. A social networking high would be composing a message on a wall or news feed and waiting for responses.

For the technologically influenced masses today, receiving responses and comments on their Facebook gives a person that fix they need, Hurwitz said.

With the emergence of smart phones, people now bring this problem everywhere they go, causing them to spend countless hours looking at their devices, she added.

In order for her to do well during the Summer session, Paola Santiago, a psychology major, had to deactivate her account so that she could focus on her class.

But during that time, she had difficulty staying off her account and decided to reactivate it.

“I have not been as focused during this second half of the (summer) session and I blame Facebook for a lot of that,” Santiago said.

Hurwitz explained that not all social networking users are addicts and that it depends on one’s self-confidence.

She noted that a person with high self-confidence has the ability to limit their usage, but creates only a temporary narcissism with them. However, a person that has lower self-confidence tends to make multiple posts within a day, making their addiction worse.

Consistently indulging wants is not healthy for a person, both mentally and physically, she added.

“People should learn to use social media in moderation,” Hurwitz said.

As a result to this addiction, people may appear to be narcissistic, a form of excessive love with oneself, on their accounts.

The content of a post does not make a person a narcissist, but rather the extent of their addiction to the process, Hurwitz said.

People who spent more time checking Facebook showed signs of being narcissistic, according to a study by York University in Toronto, Canada. However, being narcissistic is not what makes a person spend hours on end on the website.

“Narcissistic posts are typical of social behavior,” said Dr. Mark Sergi, a clinical psychology professor at CSUN. “We all have narcissistic tendencies.”

Human beings have the need to be social with one another and sites such as Facebook and Twitter satisfies those needs, Sergi said.

With new social networking websites emerging, Eser said he is fearful of what kind of side effects new social media will cause.