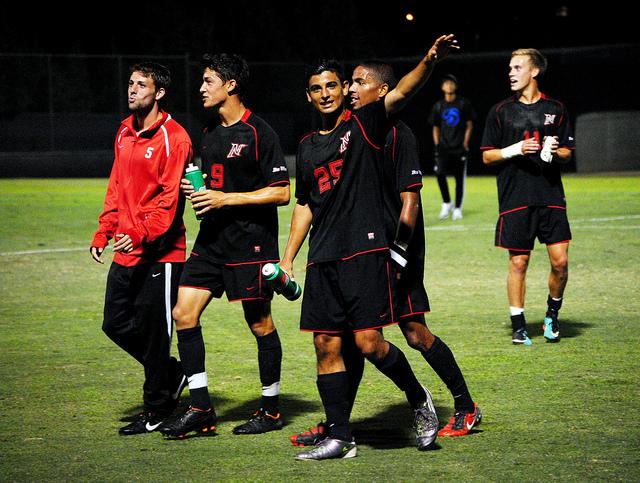 Following a year in which the CSUN men’s soccer team didn’t get its first win of the season until game No. 8, things are looking much improved early on in 2011. The Matadors (1-0) won their season opener against Canisius 2-0 on Friday night with an overhauled roster.

And it’s because after an awful 3-14-2 record last year, CSUN decided to freshen up its roster with 12 new players, eight of them freshmen.

Some might consider this team young, but that is not how head coach Terry Davila, who won his 100th game as a Big West Conference member versus the Golden Griffins, sees it.

“We didn’t just add new players, we added experience,” Davila said. “There’s nothing like maturity on a team. You can’t be immature and play in our system.”

So while there’s an influx of young blood into the team, there’s also experience. And Davila expects the Matadors to have the mental understanding of what the team is trying to accomplish.

With a medley of qualified players filling in different positions, the team is looking to impose its will against the opposition this season. One addition to help the Matadors reach that goal is forward Yarden Azulay.

Coming from Jordan Valley, Israel, Azulay, who had a shot on goal in the season opener, has three titles to his name already, all with the Beitar Jerusalem F.C., a youth team from Israel. The Matadors hope his international experience will transform him into an immediate impact player this season.

A key area Davila paid attention to when scouting these new players was their junior-college and club pedigree. Some of the teams the newcomers played for include JC’s like Cerritos and Moorpark and club teams like the San Diego Surf, Real So Cal and FC Hasental, Davila said.

“One of the things that we looked for is that they came from good programs,” Davila said. “They’ve been schooled and disciplined and expected to do the right things from the programs that they’ve come from.”

Though players are new to the Matadors’ system of play, a few of them have actually had experience playing together, in one form or another.

Defenders Luis Armando Gutierrez and Jose Luis Garcia (two shots on goal versus Canisius) both transferred from Moorpark and played for F.C. Hasental, but had known each other even before that.

“Gutierrez and I grew up playing (against) each other in high school,” Garcia said. “We’ve been playing with each other for the past eight years.”

Captains Joe Franco and Rafael Garcia also played alongside Jose Luis Garcia and Gutierrez on F.C. Hasental during the summer.

And while Davila found experienced players from different colleges and clubs, the majority of his team renovation came from high schools. One of them, freshman Zachary DeVille, is sold on Davila.

“I saw their program and they play a different type of soccer,” said DeVille, a forward/midfielder. “It’s a type of soccer that I want to be a part of.”

DeVille, a kinesiology major, led University City High School to a 19-8 record and a CIF championship during his senior year.

“I want to help CSUN achieve (more),” he said. “Hopefully, this year, we can be more clinical in front of the goal.”

Davila not only likes the experience and maturity of his new players, but also their confidence and capabilities inside and outside of his system.

“You want people to buy into your system, but be able to make the area of their field their own,” he said. “These players are the ones that are special.”