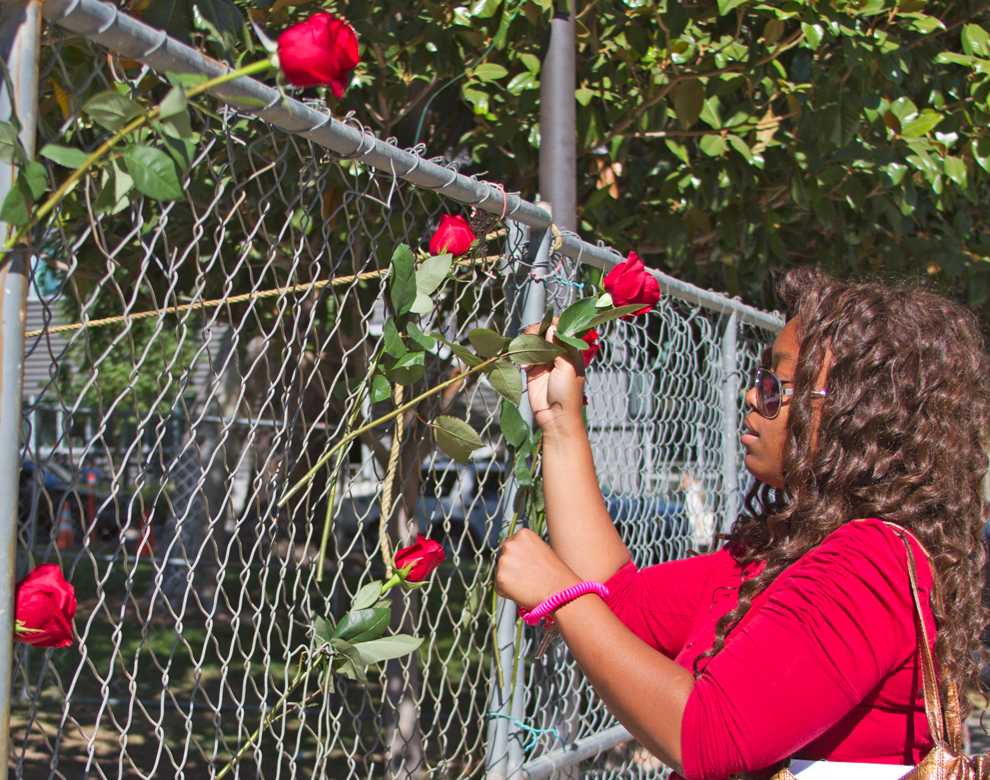 Jessica Williams, upper division seat II senator, places a rose in the fence surrounding the new Matador statue as part of the 'Tradition of the Rose' which was reinstated at the A.S. meeting Tuesday. Photo Credit: Tessie Navarro / Visual Editor

Examining the lack of accommodations for breast-feeding women and a new campus tradition were among Associated Students’ first orders of business Tuesday during their first meeting of the semester.

The absence of resources for mothers to pump breast milk on campus was critiqued.

“If a woman doesn’t have a place to pump, she’s probably going to stop altogether,” former CSUN student Genevieve Calvin said during her 15-minute presentation.

The need for accommodation is crucial, Calvin said, with over 90 percent of women breastfeeding directly after leaving the hospital, and an increase in birth rates shown with students ages 18 and 19.

Klotz Student Health Center offers some lactation accommodations for faculty, staff and students, but its short hours and far location could prevent people from using it to its fullest potential, Smith said.

The measure mandates a private space big enough to walk in to ensure that a woman can pump in private. This excludes bathrooms and cars, both popular places women use to accommodate their lactation needs.

The senate shifted to school spirit when University Affairs invited students to attend the freshman convocation and the unveiling of the matador statue next Thursday evening in front of the library.

A proposition was approved to reinstate the “Tradition of the Rose,” which calls students to place roses on the new matador statue to symbolize accomplishments, struggles, or other symbolic change or action taking place in their life, according to Veda Ward, faculty advisor.

“[Matadors] are the equivalent of Kobe Bryant and Jay-Z,” she said, speaking about other parts of the world.  “You put up pictures of matadors on your wall.”