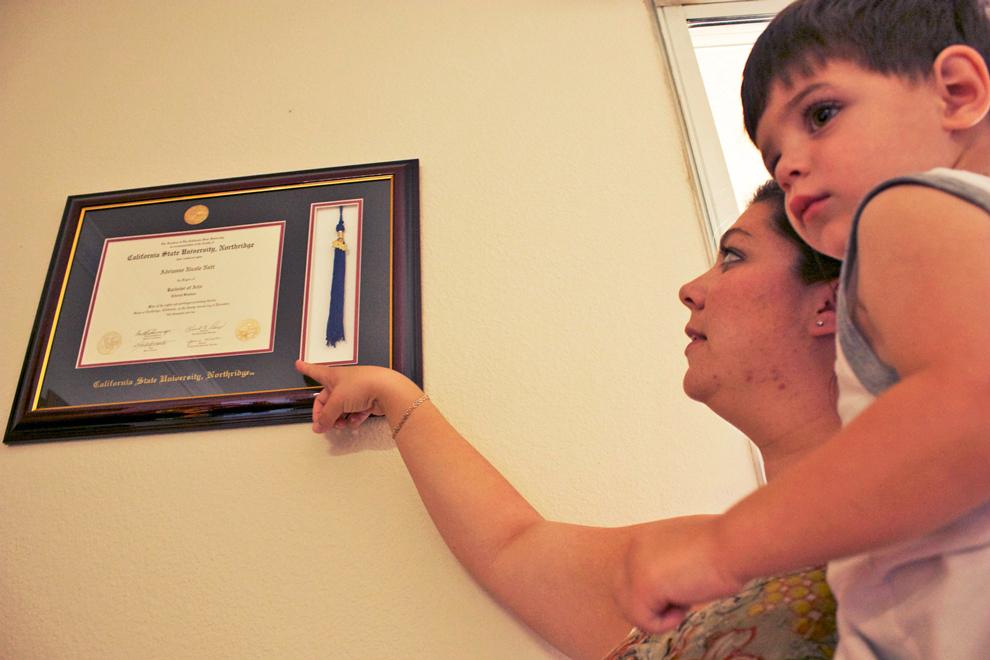 Adrianne Lord, a 2010 CSUN almuna holds her two-year-old son, Tyler, and points to her bachelor's degree diploma. She will be paying for the student loans she acquired to pay off her education for the next 10 years. Photo Credit: A.J. Circhirillo / Daily Sundial

Her son sits cross-legged in front of the TV. She gracefully walks the room putting away his toys and tidying up. Just above where her son sits is her diploma in a glass wooden frame.

By the time she is done paying off her student loans, one son will be 12 and the other 10; she and her husband will finally be able to begin saving for their children’s college educations.

“They make it very convenient for you while you’re in school to qualify for loans, to get the money; it’s when you’re in repayment, that’s the hard part,” said Adrianne Lord, 24, who graduated CSUN in 2010.

Lord, mother of two and CSUN alumna, has had to take on four different loans, two of them federal and the other two direct loans, which are private. She is afraid to consolidate her loans because she is lucky enough to have a low interest rate on the private loans and doesn’t want the other two to rise in interest, as a result.

She said it is difficult with two infants at home and the stress of a $396 monthly student loan bill doesn’t help.

“We had to pay off my husband’s car (full amount) to afford my student’s loan,” said Lord.

She felt she lost much of the college experience because she was always worried about cramming as many units into each semester as possible to try and save money on her loans. In her view, the standard of education comes second to getting a cheap college diploma.

The amount of student debt has risen over the years.

According to the Project on Student Debt, 67 percent of college graduates had debt in 2009.

“The debt has been shifted from money that the state is going to pay through taxes and things like that, to money that individuals and consumers will pay through fees and tuition,” said California State University Northridge Provost and Vice President of Academic Affairs Harry Hellenbrand.

When the students who took out loans graduate from college, they will have an approximate equivalent of one year’s salary in debt, according to the CSUN provost.

David Braca, 38, graduated from CSUN in 2001 with a Bachelor’s degree in business administration, decided to turn to loans to pay for his college education.

“They keep raising tuition… You can’t pay twice as much, so you pay half and the other half as a loan, so every time they raise tuition, all they’re doing is boosting the student loans,” said Braca.

Braca is just months away from completing his final payments on his student loans, which became a ten-year ordeal. He took out a loan each semester for six years during his schooling. When he graduated, he opted to consolidate the 12 or so loans and lock them at a luckily very low interest rate.

“You know, they kind of offer it to you (loans) and at the time, they didn’t really explain how long it would take to pay off and how much you were going to be paying, it was hey, you qualify for this much money, do you want it and I was like sure, I’ll take it all,” said the CSUN alumnus.

There are few ways a student can pay for college. There are grants, loans that do not have to be paid back, federal loans, that are lent through the federal government with interest, and private loans, that can be taken out from several private banks in America, which must be paid back with interest. The interest, in many cases, is not a locked-in rate and fluctuates with the economy.

In an email that was sent out from William Watkins, Vice President of Student Affairs, calculated it out to be an additional $294 for undergraduates and $360 for graduate students. Today, tuition costs $3,244 a semester for an undergraduate student; it has more than doubled in ten years.

Hellenbrand believes that the Cal State University system is still a bargain deal and individuals who graduate with degrees come out with twice the amount of pay as those who only have a high school diploma.

“My belief is that it is not fair; when you make money as a citizen having gone to college, you are paying taxes, staying out of prison, and you help to fuel the U.S. economy and the state economy which brings more benefit to the United States. So I think we’ve aired on the wrong side of this thing,” said Hellenbrand.

CSUN has a graduation rate of 44 percent according to Institute of Education Sciences (IES) on average, students who graduate from Cal State Northridge, from freshman to graduation, will owe around $35,000 in loans. Those individuals who transfer from community colleges will leave CSUN owing on average around $25,000 according to Hellenbrand.

Freshman Sandy Nguyen could not pay tuition costs on her own.

“I applied and got the Cal grant and the Pell Grant and have been saving money since I was 16 working as a lifeguard,” said the kinesiology major.

Nguyen realizes that due to expenses, her grants’ funds are diminished and has prepared to take out lengthy and cumbersome private loans. She plans to keep her grade point average above par, acquire scholarships and attempt to find work as a lifeguard.

“The state and federal government are looking to shed cost, meaning grants,” said Hellenbrand. “The second thing they will do is shed low interest loans and for us. The issue becomes: when do the loan’s burden affect the student’s ability to come to a place like this, and the decrease in state funding impact our ability to offer programs?”

Lord and her husband began to pack up for a day at the park with Tyler and Jackson; one of Tyler’s favorite activities is feeding the ducks.

She looked down into his deep brown eyes. Lord said she wondered what ordeal he would have to face for higher education.