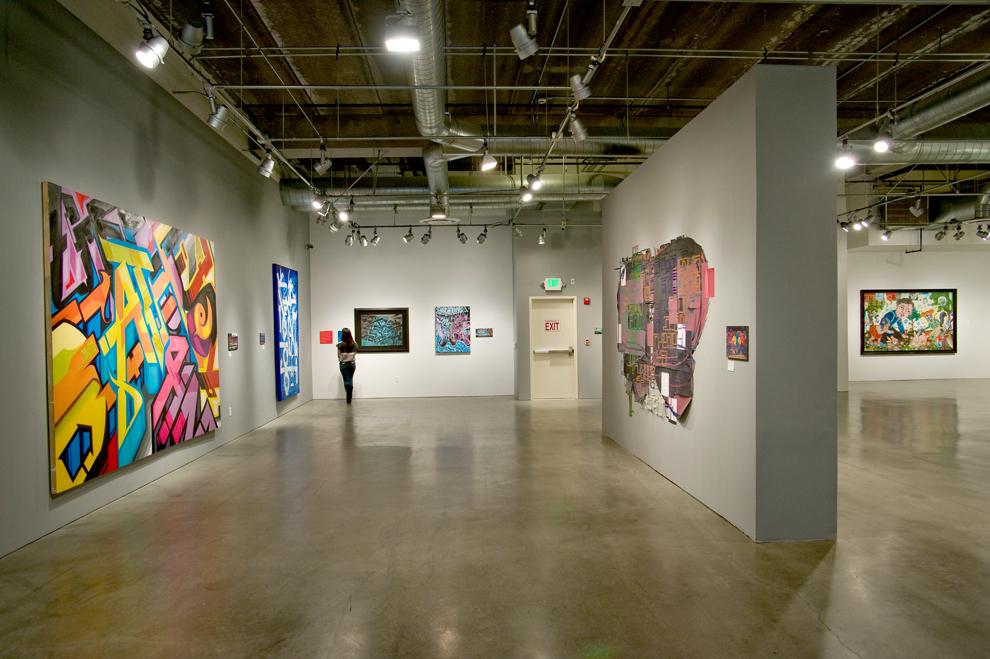 Currently on display at the Pasadena Museum of California Art is the 'Street Cred' exhibition. Some artists featured in the exhibit include RISK, REVOK, Michael Alvarez and Nicnak. Image courtesy of the PMCA, ©Don Millici.

Graffiti lines the walls of the Pasadena Museum of California Art (PMCA),  but there are no signs of vandalism. Appropriately decorated with deep blue and seemingly random strokes of paint, the PMCA welcomed its newest exhibit, “Street Cred: Graffiti Art from Concrete to Canvas.”

From license plates splattered in paint to foam and acrylic sprouting from the corner of the wall, the PMCA grasped the evolution of graffiti and projected it to its observers.

“The show is about people in Los Angeles that started with graffiti but have evolved a body of work specifically for the gallery setting,” said Steve Grody, co-curator for the exhibit. “This is a minority of graffiti artists and a third of that group still get up on the streets.”

The exhibit began May 15, and goes on until Sept. 4. Thus far, it’s been well-attended, according to Emma Jacobson-Sive, director of public relations at PMCA.

“We didn’t know how (the graffiti) was going to be perceived but that’s what made the positive response so wonderful,” Jacobson-Sive said. “It’s a narrow focus, and people that wouldn’t normally be interested in graffiti or street art have been interested in the fine art context.”

Normally, the PMCA tries to mix historical art with contemporary for a well-rounded experience that allows their visitors to see a bit of everything, Jacobson-Sive said. But this time around, all three exhibits have a modern feel.

Aside from “Street Cred” they also are featuring “Getting Upper,” a reconsideration of the alphabet that is based on the deconstruction of graffiti, and the “Clayton Brothers” whose work is loosely based on graffiti style.

“It wasn’t intentional that these three exhibits came at the same time. It became synergy that it happened this way,” Jacobson-Sive said. “These three exhibits were in the works for years, and they just found their natural home together in what seemed like a logical marriage.”